Something Not Said by Noel Dunn 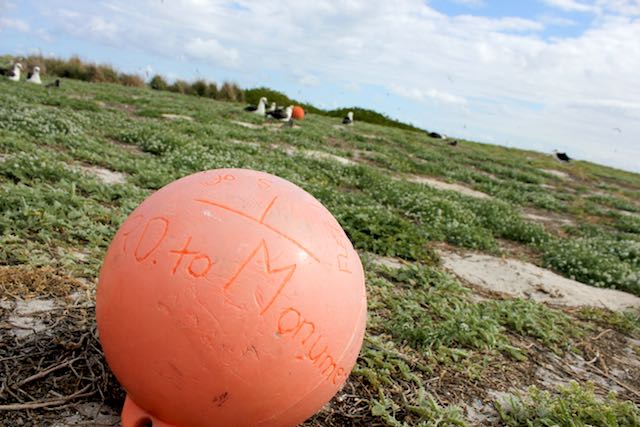 Confession: despite five months of blog posts, there’s an aspect of life on Kure that I haven’t mentioned. Here’s the fact I’ve shared: Green Island is divided into 91 Restoration Areas (RAs). Here’s the detail I’ve omitted: buoys recycled from the endless marine debris have been strategically placed around the island to border RAs like street signs. For instance, there is a red buoy faded to a pale pink in the middle of the central plain with a thick black line drawn down the middle. On one side it reads ‘Plots’ and on the other side it says ‘Field of Dreams.’ Here’s my personal perspective: the recycled, washed-up buoys that dot the fields give Kure the same eclectic bohemian backyard feel of a quirky neighbor who is friendly but seems like a hoarder. Based on this new information, do you feel deceived? As a reader with new insight, you are undoubtedly re-working the images of Kure in your mind by inserting labeled buoys everywhere. Add a large black buoy with white writing on the beach across from the pier and your mental map becomes more accurate. When you think of a masked booby standing in a patch of ‘alena (Boerhavia repens) you should probably picture a small red buoy under his feet. Has my failure to report this detail before now made your vision of Kure less true? By comparing the recycled border markers to someone’s backyard, I’m inviting you to insert your own experience with a neighbor who reuses items other people consider trash. Although that raises a new question – by adding your own personal experience to my account of Kure, does my description become more or less real?

Fact: On Monday morning wind speeds are consistently around 30 mph with the highest wind speed all day reaching 38 mph. Ryan and I walk along the beach from south point to the pier to see if albatross chicks are getting buried in the sand. Details: the chicks aren’t completely buried but many without the cover of an adult have a thick layer of sand collecting in their down. Ryan and I place large objects in front of the chicks to create windscreens. We find and use a few pieces of large coral rubble but beach litter is equally conducive to our purpose. We pick up buoys from the water line and place them where they will block the wind and force sand to fly up and over the small chicks. We also use empty laundry detergent bottles, old televisions, hard hats and I even use a particularly large shoe as a barrier for one still tiny chick. By the time we move on to the next section of beach, the chicks in our wake are barricaded behind walls of colorful trash, ready to wait out the wind’s onslaught. Perspective: It feels unseemly to use the same plastic marine debris that will eventually break apart and end up as a deadly collection in their bellies to protect the chicks now. As I partially bury a light blue laundry detergent bottle securely next to a chick, I wonder if reusing this trash for something good could be atonement for our society’s plastic sins. A forceful gust kicks sand past my plastic sunglasses into my eye. I move my back to the wind to smooth away the pain and when I look down the beach I see an albatross chick scoot closer to an old television and tuck her head against the screen as though it offers the same fierce protection of a teddy bear. As a journalist, I was told to only report facts and details but as a reader, I latch onto more vivid imagery. Tomorrow what will you remember about this article – the wind speed, the types of trash littering the beach or a wild bird cuddling with outdated electronics in a sandstorm?

Reduce, reuse, recycle isn’t so much a motto on Kure as it is a way of life. Marine debris toothbrushes are brought back to camp and used to scrub field kit clean. A surprising amount of plastic stakes wash up on our beaches and are used to label Brown and Masked Booby nests. Toys recycled as food by albatross that are later coughed up or, more likely, blown out of rotting rib cages are constantly picked up by us and passed around as novelty items. A past Kurean collected lighters and made an artistic chandelier that decorates the common room in the bunkhouse. Albatross aren’t picky about the color of a lighter they eat but whoever collected and strung them together had discerning eyes placing yellow lighters at the top, reds at the bottom and a pattern of orange, purple, blues and greens in the middle. Plastic crates that float onto our beaches are used to cover out plantings to keep them safe from destructive albatross. Coryna, Andy and I plant dwarf eragrostis (Eragrostis paupera) in the north and are concerned the next field crew won’t see our tiny native plants amongst the fast-growing weed, sweet alyssum (Lobularia maritima). We collect empty beer, vodka and sake bottles, a flipflop and a hairbrush from the beach and half bury them in the sand around our baby plants. We tie pink flagging tape to the tops of each item to encourage newcomers to pay attention to their work in this spot. This area is near the border between beach sectors two and three which is memorable because the marker is a washed-up motorcycle helmet sitting on a pole. Large plastic barrels and old boat hulls are moved up the beach and used as collection points for ropes, eel cones and any other item that poses a wildlife entanglement hazard. On Friday’s seal survey, Andy cuts 60lbs of wet ropes away from a juvenile green sea turtle’s flipper. The turtle sustained damage to its front left flipper and has abrasions around its eye and on top of its head. If a turtle is caught in and drowns from the man-made rope but its carcass is never found or reported, does its death become blameless?

Field notes, March 5, 2016, 11:45 am: An adult albatross in camp assumes feeding position by bracing its wings a few inches away from its body and positioning its head below its heart. As soon as the adult opens its beak to regurgitate fish oil, the chick sticks its head completely in the opening to lap up lunch. Some fish oil comes out but the stream is slow almost like it is blocked. A small blue rubber band emerges, drops out of the adult’s mouth, bounces off the chick’s head and lands on the ground. An inch away, some of the fish oil lands on the adult albatross’s foot in a perfect circle of inky grey goop. The chick, still hungry, begs for more food but the adult starts preening the chick instead. What’s more important in these observations – the facts, the details or what message reader’s take away?

Perspective: Some people will spend ten minutes reading this blog and will walk away knowing that the human population on Kure reduces the marine debris, in part, by reusing the items that wash up on the beach and by removing entanglement hazards. Other people will recycle the subtext into their own lives and when they start to throw something away, they will hover over their trash cans wondering if they can reuse toothbrushes, laundry detergent bottles and every other plastic item for a secondary purpose. Maybe some of these people will even opt not to buy items packaged in plastic. So you tell me what is a bigger concern – the words we don’t say or the actions we don’t do?