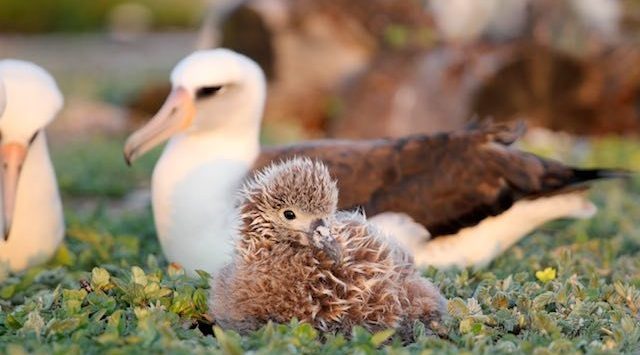 Howzit kākou! Can you believe it is February already? On Monday, we officially made 4 months of living here on Hōlanikū. The next thing we know, itʻll be off-load day and the Summer crew will tag us out and take the next round fighting off Verbesina. Itʻs small-kine sad just thinking about leaving such a beautiful place, but I am taking in as much as I can, living and appreciating each moment that I have here.

Itʻs no surprise we had another cold and wet week here on Hōlanikū. The week started off with storms; the highest gust of wind was at 64 mph. We closed the shutters of the camp house, leaving us to eat in darkness once again. The waves were crashing outside on the reefs and firing inside the lagoon as well. The island is foggy with salty air-one of my favorite things from home in Haleʻiwa. We also had thunder and lightning on one of the stormy nights. The chilly wind and rain left us freezing, making me really miss taking hot showers (something I am looking forward to aboard the Kahana). With low solar power due to the weather, we had to turn off the fridge and freezers to conserve energy – forcing us to eat something that requires no refrigeration or to be quick like ninjas when grabbing something from the fridge.

Itʻs crazy to think that while we are freezing, and indoors, these albatrosses are battling the extremes, determined, and committed to keeping their chicks and eggs safe and warm. As the rain pours, the parent is unmovable in the nest. Some of them deeply settled in the nest bowl appearing a bit pudgier than they really are with their heads sunk into their necks and their wings spread out enough to cover majority of the nest to ensure their chick is warm. The aloha I see through these magnificent birds is really touching. Itʻs so cute to get a little peak of those tiny fluff balls snuggled up and cozy under its parent’s brood patch. Nothing can compare to the warmth you receive from a parent.

On the stormy days, we stayed indoors and completed the food inventory so that the Summer crew could prepare for their food shopping for their camp season. It was like Christmas again, opening buckets full of “new” food, stoking on new meals we could make. On other rainy mornings, we did nursery work propagating mauʻu ʻakiʻaki and ERAPAU and out-planted hundreds of kāwelu and lepturus. Because it rained majority of the week, we were able to treat only 12.6 acres. But you know these hammahs will jump right back on it and “spray and slay.” In addition to the usual work, we broadcasted AMDRO near the areas where we found big-headed ants. Now that the albatross chicks have arrived, it is important that we have this issue under control so that our bird friends can live in peace.

As for our weekend fun, Saturday was that “window” to wash and dry clothes, knowing that it was going to be a wet weekend. Although our clothes are never really “clean,”-just soaked and rinsed in buckets- they did get a few extra rinses from the rain. When it came to lunch, cravings overwhelmed me, and I finally made a meal that Eryn and I kept discussing throughout the week – SPAM MUSUBIS. The stoke was real! I had the biggest smile on my face because it reminded me of home and the fond memories of making these local treats. Was ʻono! Since it was a free night, we all made our own dinners and played a few intimate games of “Candlelit Bananagrams” (since the solar power was off and the batteries for our headlamps are too valuable haha). After the exhaustion from the previous weeks, it was nice to have another bonding night with the crew.

Well gangeh, we got 4 months down, just 2 more to go! As the season slowly comes to an end, I am taking in each moment, reflecting, learning, and growing. Although we may face bi-polar weather, my aloha for Hōlanikū will remain constant. If not constant, it only continues to grow deeper.

Eia ka ʻōlelo noʻeau o kēia pule: “Pumehana ka hale i ka noho ʻia e ka makua” (Warm is the home in which a parent lives) -Ka Puke ʻŌlelo Noʻeau a Pākuʻi #2743. At some point, these albatross chicks will be alone in their nest bowl as their parents fly great distances for foraging. However, during these first couple of weeks, mommy and daddy will be taking turns feeding and keeping the chick under their protection. Sometimes the parent so fixed on incubation that they will not even get up to switch places with their mate. Their commitment to their offspring is astonishing. As for us, whether it is leaving our “nest” to go to school or traveling to distant places, there is always the comfort of knowing we will have a home to return to – a refuge, a warm embrace, and lots of food for nourishment. As Grandma always says, “Go eat!” 😉 Wherever a mākua or kūpuna resides, it will always be warm.