A Workday on Kure 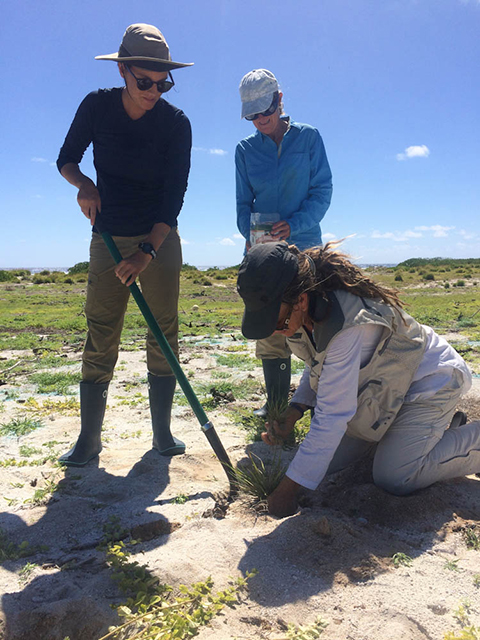 6:56 am I’ve pressed snooze on my alarm more times than I can count, thrown on some work clothes and finally made it out of the bunkhouse. I’m probably projecting, but the sun also seems reluctant to wake up as there is only a faint orange glow peaking over the tree line in the east. Walking slowly, it only takes me a minute to get to the camp house where Ryan is in the kitchen eating a bowl of oatmeal. Coryna points out for the second time this week that my shirt is inside out.

7:30 am Everyone meets at the shed and grabs their field kit. The island is split into one hundred sections or Restoration Areas (RAs). We aim to get rid of weeds in each section every six weeks. We go to this morning’s section, nicknamed ‘Pole 5’, but quickly change our plans as there is a seal sleeping near the naupaka shrubs that line the beach. We work in a nearby RA in hopes that he will wake up and move closer to the water’s edge as the day heats up.

10:20 am The seal is still sleeping near the shrubs in Pole 5 but his head is now angled toward the ocean. Eryn and I are given the go ahead to work near him because (a) he’s sleeping (b) we’re downwind of him and (c) we don’t need to talk to finish our work. At some point the seal starts to wake up and scratches his head. Eryn and I freeze. It feels like a game of Red Light, Green Light where the seal is ‘it,’ when the seal settles and lies back down, we keep working.

10:26 am The seal is scratching his head again and sneezes. It’s ridiculously cute and difficult not to giggle.

11:35 am Everyone is in the kitchen heating up last nights leftovers for lunch. I accidentally spill some water and use the broom to spread out my mess on the concrete floor. The water evaporates as I thin it out. Martha looks flabbergasted and says my solution would never ever work in Alaska.

12:38 pm Usually we spend a majority of our mornings and afternoons weeding. But today, we switch things up and do some out planting. We translocate a few native plants that are growing closely together to a spot a few hundred yards away where we hope the native plants will soon outnumber the invasive species. It’s a nice change of pace to encourage growth and life instead of killing weeds and everyone dotes on their transplants. We carve the sand and dirt around them into forts, creating moats to direct water to their roots and we rip off leaves from a nearby invasive shrub to create canopies of shade to give them a better chance at surviving this slightly traumatic change.

2:30 pm We’re back to weeding, which is cathartic in its own right. This afternoon we’re working on a section of the old runway where the albatross will soon takeover for their nesting season. Cynthia tells us to particularly be on the look out for a plant with thorns that imbed themselves in the albatross’ feet on the hard surface. The same thorns have imbedded themselves in my feet numerous times. It’s painful and I’m happy to help ensure the albatross will not suffer the same fate.

4:30 pm The work day is over and my body is tired. Somehow, shedding my work gear and taking off my boots gives me more energy, which is lucky because Coryna has decided to be my personal trainer and she cajoles me into doing sit ups and pushups calling this portion of our day ‘time to rip up our abs.’

4:50 pm I exchange my baseball cap for a floppy hat, grab my shampoo and conditioner and head for the beach. Erin, Ryan, Coryna and I all meet up on the way and when we get there Martha is already in the ocean swimming laps. While we’re chatting and splashing around, Andy arrives in all of his field clothing. His pace doesn’t slow down at the ocean’s edge, instead he holds up his soap and grins like he’s the most brilliant person in camp. I think this is his version of laundry.

6:30 pm We take turns cooking dinner and tonight Cynthia went all out with spanakopita and veggie burgers. We start talking about the upcoming albatross season. Eryn says that she once fell asleep on the beach and an albatross woke her up by pecking at her head and Andy says he’s been in the field before, trying to do some work, with one of the albatross pulling at his work pants. I’ve yet to see an albatross on land and have a hard time picturing just how big they must be up close. I can’t wait for them to arrive.

7:15 pm Some nights I walk down to the beach for the sunset. Tonight, I opt to sit on the camp house roof. The island’s mid-day hue of vibrant emerald has turned into an understated evergreen. This evening the clouds are purple, grey and fluffy. The moon seems to be rising in sync with the sun’s setting and 12 mile per hour winds are swirling my sundress and hair around me. A masked booby riding the same wind draws near so I raise my hand to wave at him. I think it catches him by surprise because his head moves as if for a double take and he dips his left wing, turns and does a second pass around me. I can’t help but smile.