The Still Waltz by Charlie Thomas 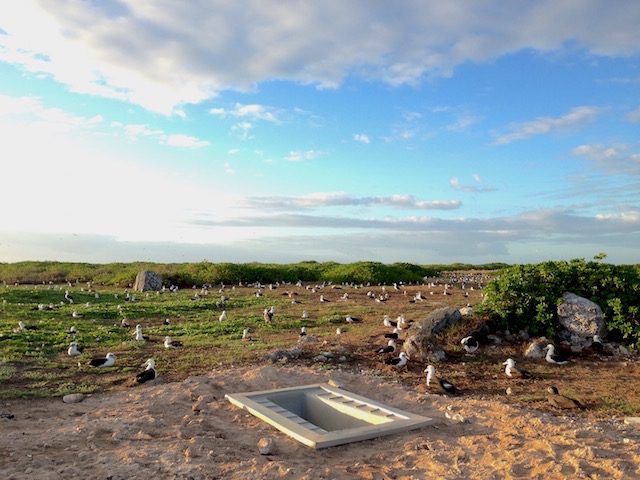 East beach overlooks me. I glance up and down the sand with a tender gaze, my eyes flinching in retaliation to its bright whiteness. The onshore breeze catches my stare and draws it towards the sky where it’s met by a sight I‘ve only seen in museums. It’s as though time is frozen above my head; birds of all colours, shapes, sizes and kinds seem to float effortlessly in the gentle space between my eyes and the clouds.

Dozens of ‘iwa, noddies, terns, boobies, albatross and tropicbirds dance a still waltz with the wind caressing their every move, as any skilled dance partner would. It is truly mesmerising. I reach out to pluck the invisible strings suspending them above me, like I would always imagine doing in the hall of Natural History at Auckland’s War Memorial Museum. I would stare in awe and wonder, no different to how I am now, but there are no strings attached and no cotton stuffed under the feathers of these birds. They are present in this moment in every way possible and I am too, savouring every spellbinding second of it.

Each slender, hooked and pointed beak points towards the ocean, air gripping at every feather that glows in the slipping afternoon sun. I turn my attention to the reef far out across the lagoon in front of me and watch the horizon as they do. Feeling the breeze funnel past my eyes and ears, it whispers secrets to me in a language I do not know, but wish I did. Maybe it tells a story? The birds gather here to listen to what the wind has seen, to hear of the sail boats it’s propelled and the seas it‘s churned. Now if only it would tell me too! I have a lot to thank the wind for, but for now it delivers much needed relief from the radiating heat and deposits a thin layer of salt on my blushing cheeks.

I look up to see that the birds have taken their shadows and left, dispersed in a gust of chatter and screeching as the air currents lead them elsewhere. The sky is empty for a few moments, a rare and strange thing to be seen out here. On any typical day, tropicbirds form a fluttering shower of white confetti just above the tree tops and the sooty terns spiral outwards along the entire eastern edge of the island, in what I could only describe as an ‘enormous swarm of flies’. And the albatross, well, there‘s no comparison I could use for them. They are what they are and anyone who has ever seen one would agree that that is enough.

One begins to approach me at the naupaka edge. It looks at me intently with a curious stare so I pass one back before returning my eyes to the shoreline. A Laysan chick is sitting right at the water’s edge and it stretches its wings up and out as far as it can, even waving them a few times. I’m sure it thinks that they’re as long as the beach itself, the whole island, maybe even the entire Pacific! Each flap of it’s long, glorious wings and tip of it’s tippiest feathers would brush the coastline of Japan and the US with the greatest of ease but then it folds its soft, downy wings away. That’s for another time. Soon it will dance the still waltz, conquering the sky and mastering the wind. For now though, it joins me here on the sand, two feet firmly planted on the ground.

The adult albatross at my feet that‘s kept itself busy by pulling on the straps dangling from my bag, turns to the water and takes off into the air with a few hurried steps. Does the ocean call it? The scent of fish and salt water stirs in my nostrils. Why fiddle with a few flapping pieces of elastic when the Moana is out there demanding to be explored.

A grin grows on my face as the albatross disappears into the distance and I laugh to myself.  I will be forever lost trying to navigate the mind of such curious and bemusing creatures. One thing that I do know, however, is that even in the most difficult of times, they will never cease to put a smile on my face. That is for sure.