The Case Against Verbesina 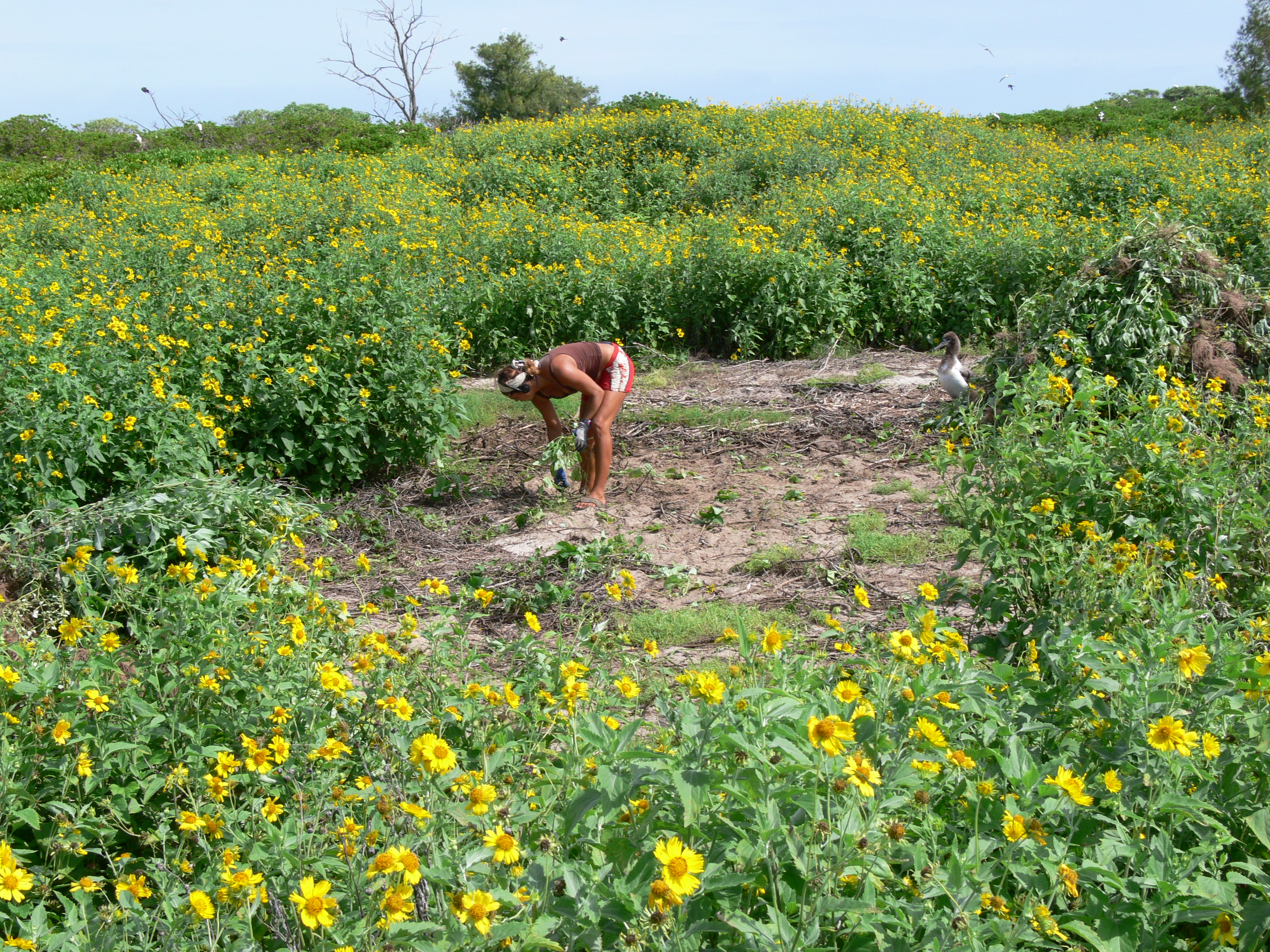 His crimes are extensive, but most biologists sum up his destruction by calling him an invasive species. When it comes to invasive plants, Verb is the crème de la crème. On Green Island (the name of our island within Kure Atoll) charges against Verb include:

1. Habitat degradation – areas thick with Verbesina encelioides have few nesting seabirds. When areas are cleared of the plant, many birds nest in them including: Laysan and Blackfoot Albatross, Brown and Masked Boobies, Christmas and Wedge-tailed Shearwaters and Bonin and Tristram Storm Petrels. These birds have few other nesting grounds in the region and they inhabited Kure long before Verbesina showed up. Additionally, the tap root system of Verbesina is not as extensive as native grasses, which can cause burrows to cave in.

2. Inhibition of native plant growth – Verbesina out competes native plants and easily takes over habitat in an aggressive and dominate growth pattern. Three species of plants endemic to the Northwestern Hawaiian Islands (endemic as in occurring naturally nowhere else in the world) became extinct on Green Island in the last 20-25 years due to Verbesina and his invasive species cohort Lobularia maritima aka Sweet Alyssum.

3. Wildlife entanglement/entrapment – ground nesting or burrowing chicks can get caught in Verbesina, which stops them from fledging and is basically a death sentence. Also, albatross can get their wings entangled or broken, or may even die of heat stress from the lack of air circulation caused by dense stands of Verb. In other locations, Verb has been accused of being toxic and poisoning cattle.

In response to these charges, the Department of Land and Natural Resources (DLNR) and our team leader, Cynthia, came up with a ten-year plan to get rid of Verbesina encelioides on Green Island. The eradication program is a long-term effort because our perp went underground- literally.

Within the first 4 years, the areas of Kure that had large, tall standing patches of Verbesina were removed. However, each Verb flower can have 300-350 seeds and each plant can have multiple flowers. These seeds easily disperse and grow rapidly. Getting rid of the large plants was only the first step. The work was far from over, due to the additional invasive attributes of Verb including:

• The ability to withstand drought
• The ability to handle a wide range of growing conditions i.e. various temperatures and soil types
• Rapid growth and long periods of seed dormancy. Some reports show that areas which have been cleared of Verbesina encelioides for five years have re-sprouting plants.

Currently, we are in year 5 of the 10 year plan. Each day our team goes to a section of the island, lines up and transects every inch of that restoration area, counting and pulling any Verbesina in our path. Most of the Verb we see are small and don’t yet have flowers, which is proof of eradication progress. When we do come across a plant with mature seed heads we cut them off and place them in a plastic bag before pulling the plant out of the ground. Eryn refers to the bags of seed heads as ‘nuclear bombs.’

The initial infestation of Verbesina was in a section now called Radar Hill. In 1955, this spot was where the Navy brought over bulldozers from Midway to help construct a Radar Reflector. It’s believed that a verb seed was transferred over on that equipment with the first official report of Verbesina recorded in the vicinity of Radar Hill in October 1959.

There are still a few Verb left in the Radar Hill area, which is where we are working today. Cynthia and I are walking next to each other as we transect the area, and we come across some glass bottles, half buried, almost spilling out of the sand. Despite being trash, they are beautiful and alluring. We take turns guessing what the military or Coast Guard, who later built and maintained a LORAN navigation station on the island, kept in them. I guess alcohol but we take the cap off one and there is a stopper, like those on cologne bottles, that restricts the amount of liquid that comes out. We wonder how much cologne could men on a remote island need? Perhaps they held antiseptic liquid? I ask Cynthia if there was an infirmary over here as she visited the island a few times when it was still under Coast Guard control.

There are so many bottles we take a picture. Sometimes the appeal of Kure is the wildlife and sometimes it is the history of shipwrecks, previous military staff who were stationed here and the possibility of Polynesians visiting the island long before that. While there is no official record of Polynesians on Kure, it does have a name in the Hawaiian language, which leads some to conclude that they must have stopped by the island.

But today’s investigation is all about Verb. As we move about the island, we also remove other weeds even though Verbesina is our main target. It’s interesting to look at old data. On February 17, of this year 393 Verbesina were counted within Radar Hill, an area that only spans 0.2 acres. Today we only find 1. Although, we can expect a higher number of Verb again in March/April as this time of year seems to typically show a dieback of the species.

After we complete our transects in each restoration area, Andy takes out his field notebook to record data regarding how many Verb and other species of weeds we encountered. It usually feels like an interrogation from a rookie cop.

I list off the usual suspects and tell him I counted one Verbesina.

‘Verbesina you say?’ Andy says slowly, eyebrows scrunched in, pencil at ready, ‘What did it look like?’

Not flowering. Superficially a good sign, but where there was one Verbesina, there is the potential for more. The case against Verbesina encelioides on Kure Atoll remains open.