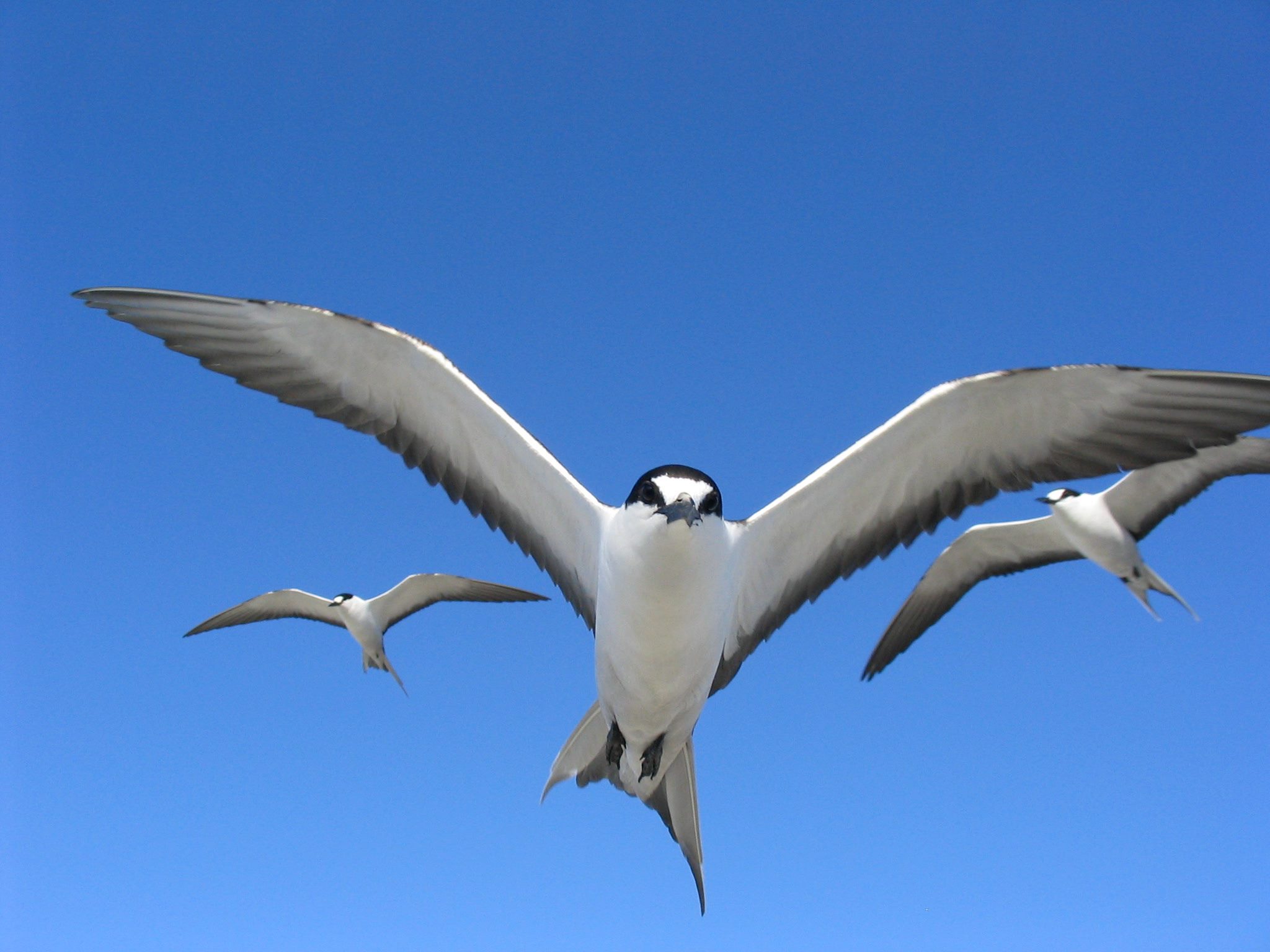 We’ve marched well over the six-month mark and with less than a month left here on Green Island, Kure Atoll, our few remaining days are quickly passing by. Besides the obvious cleaning and packing that is still before us to let us know the field season is ending, there have been plenty of new sights, sounds, and arrivals ushering the change as well as we roll out of winter and spring forward to summer.

For several weeks now, the skies have been speckled with hundreds of whirling orbs of white as Red-tailed Tropicbirds somersault with one another in their courtship displays overhead. The display is rhythmic in its progression as one bird flies upward into a stalled position and another one swoops underneath it before the one above drops down in a cut behind the other. They cock their long red tail feathers to one side or the other as if they were a rudder steering them in the process. Needless to say, the whole time this acrobatic display takes place they are squawking up a storm and we have had the alarming shock of their return by their sudden loud calls from within the naupaka as we once experienced when we arrived. Just this week we had our first chick sighting for the season, a fluffy, Jaba the Hut looking ball by the base of a bush.

The three booby species have all started nesting and already we have our first Masked Booby chicks, naked and as ugly-cute a seabird chick can get. Breeding pairs of Masked Boobies have dotted the north plain with bare patches of sand as they clear out vegetation to make their nest bowls and although the Brown Boobies are there along with them, they take to building nests with sticks and the occasional albatross bone they find in the vicinity. Red-footed Boobies have gone on their ventures to find the perfect stick to build their nests in the naupaka which often involves many tugs at a rooted nohu or alena vine before it breaks loose. The show begins when they get chased back to their nest for it and a Great Frigatebird swoops in to steal the prized branch at the last minute and uses it for itself. Joyfully, with the nesting of the frigates, we have had the chance to see the eccentric mating displays put on by the males as they inflate their large red throat pouches and rattle off some of the strangest noises you could imagine hearing while trying to attract females flying above. They give off a feeling there are dinosaurs here amongst us.

Offshore and high above the island, tornadoes of Sooty Terns fill the sky as they kettle in heat thermals in increasing number before the eventual fallout after they reach a critical mass and set down upon the island to find nesting spots in open areas like the Poles. Their shier counterparts, the Gray-backed Terns, arrived along with them and in doing so have given me the joy to hear and see my favorite bird here once more. Throughout the day, pairs silhouette one another in tandem flights over the lagoon and they have already started prospecting areas in the north and along the runway, looking for protected spots to nest next to rocks, dead branches, or naupaka where their chicks can hide once they’ve hatched.

Black Noddies dot many of the Heliotrope trees as they have been busy building nests for over a month and several nests that survived the big wind event last month have a small chick, which is exciting. White Terns have filled in the nooks and crannies on the lower branches of trees as they find the right indentation to put their egg in. Of course, some of these spots are in the most precarious position on moving branches or narrow ledges but I guess it helps that the chicks hatch with giant feet to hold themselves in place. With our first Christmas Shearwater sightings this week and a Brown Noddy up north, all we have left is the Wedge-tailed Shearwater to complete the list of birds present when we got here in August.

As spring migration starts for species of birds elsewhere, our winter resident shorebirds have put on their breeding plumage and started to flock up in large groups for their eventual departure north to breeding grounds in Alaska. We’ve had one of our first migrants for the year as yet another Northern Pintail, a handsome drake, arrived at Brad’s Pit water seep but did not have enough energy after the long flight here to make it off the island again. On the topic of ducks, our own Laysan Teals have started to show signs they’ve started their nesting season and just maybe we’ll get to see ducklings before we depart next month.

So though the air is still chilly and the winds a bit blustery, it’s hard not to realize Kure is taking on its other persona, the one of summer. Soon it’ll be time for us to pass the torch to the next crew who will carry on in the long line of work of many people before them and I am sure many others to come. Till then, we’ll enjoy the new sights, sounds, and days left before us.