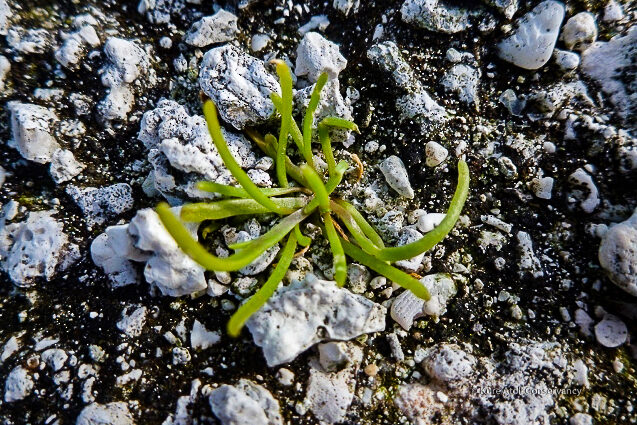 Spergularia, a non-native plant, is one of two members of the pearlwort family on Kure. It is characterized by fleshy succulent leaves, purplish flowers, and often some purple in the stem. Sagina, the other pearlwort, has white flowers, but is similar to Spergularia, especially at very small sizes. Spergularia can occur year-round but is somewhat seasonal, becoming much more abundant in December or January. It is mostly found in Camp, Runway, and Turnaround RAs.

In the early stages, Spergularia and Sagina are very similar, with color variable from green to greenish-yellow in both plants. The main distinguishing characteristic is the more rounded leaves of Spergularia compared to flattened and pointed leaves in Sagina.  Note that the shorter leaves are somewhat pointed in Spergularia as well, so plants of this size must be examined carefully.

At later stages, Spergularia (below left) tends towards a somewhat disordered growth pattern while Sagina (below right) continues to grow as radiating rosettes of leaves in dense clusters. Spergularia is most commonly a pale to yellow-green, or darker green to purplish as in the photo on the title slide. Sagina is usually dark green. Spergularia is restricted in distribution occurring mostly in Camp, Runway, and Turnaround RAs. It can occur year-round but is more likely to appear in abundance during the winter months.

A distinctive characteristic of Spergularia is the tendency for early leaves to wither and die, and for the tips of some leaves to wither, leaving a thin extension of the leaves that appears almost hair-like unless viewed with magnification. This behavior is either less likely or absent in Sagina.