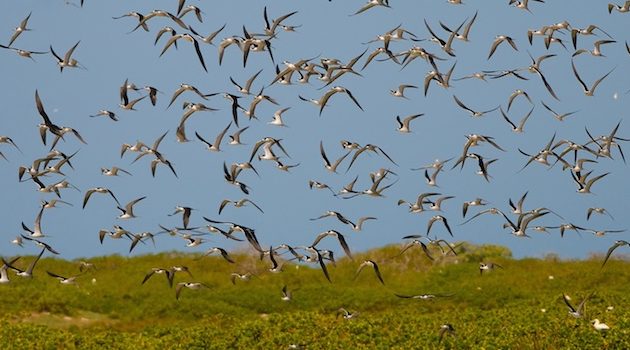 Spending my last three years in the world of birding and bird work has left me with an acute appreciation of the sounds our avian friends make, one that will likely never leave me. I’ve spent a good chunk of those years listening for birds in difficult to reach places. This is a job known as “point counting” and it means you stand in one place for a certain amount of time (usually a few minutes) and write down every bird you hear and see in that time interval, doing your best not to misidentify or double-count. To the untrained ear, it’s a bunch of “pip”s and “chirp”s that can seem indistinguishable from one another, but to those in this line of work, those who take the time to learn each species’ calls and songs, then each “chip” heard is simply a bird telling you it’s identity.

And so, I want to give you an audial landscape of Kure. For if you take the time to look up most of Kure Atolls voices in a field guide, you’re greeted with a “generally silent at sea.” I assure you, however, that while they are on their breeding grounds they make enough of a din to last the rest of the year in silence.

Laysan Albatross: Seemingly the most abundant bird on the island at the moment and surely the noisiest. The air is filled with their bill clacks similar to the sound of a Latin dancer’s castanets at varying speeds. It ranges from the light and slow snips, to drink falling rainwater in a storm, to a rattled, machine gun rapid-fire where they seem to unhinge their lower mandible at a potential mate during their dancing. They have their trademark “moo” which is somewhat mournful sounding with a throaty quality. It lasts a few seconds and decrescendos in pitch and tone toward the end. They can make a solitary or series of piercing whistles, which, if you’re nearby, may well hurt your ears. They tend to “he-eh-eh-eh” in a whispered staccato, producing a rather endearing effect on those who are listening. And of course, if they pass low over your head in flight, it sounds like a small aircraft is but a few feet above you.

Black-footed Albatross: Take everything I said about Laysan Albatross and make it a little deeper in tone and throatier in delivery. A sultrier voice overall, with a bit more “honk” than “hew”.

Wedge-tailed Shearwater: Possibly some of the strangest sounds on the island come from them-moaning, groaning, and wailing in all forms. The most typical seems to be a strangely alluring “WHooooo-hru-whOOOOOoooooo-hruh-whroooo” that alternates high and low pitches. The result is something like taking very exaggerated breaths in and out while trying to make noise from the back of the throat. They also make a series of high, quick squeals, like mice greeting one another.

Petrel: Their calls and bodies fill the sky as soon as the sun sets. Though difficult to describe, I would have to compare their calls to a sort of low radio static interspersed with regular clucks. “wurrrrrrrrrr-WHK-wurrrr-whk-whk-wurrrrrrr.” Every so often they raise the volume of their scratchy static to produce an ascending “WHRaaaaark” of a screech.

Masked Booby: They seem to be mostly limited to grating honks and squawks “WHONK” or “GWAH-gwah-gwha” as well as various grunts. The males are starting to give off a high, dinosaurian whistle with beaks pointed to the sky to show off their better qualities to potential mates. The tone is hollow, almost ethereal, and decrescendos heavily in the few seconds it lasts.

Red-tailed Tropicbird: In flight they give a raucous, circling call and bark, far from harmonious. On the ground, the young give off one of my favorite sounds: an impressive, rattling and scornful trill that can go on for multiple seconds in a single breath. The quality is somewhat like if you tried to roll an R in your throat, as loud as you can, with your mouth wide open. Go ahead and try it.

White Tern: These little angels seem to be most vocal in flight while whirling around your head. Their voice is a nasal and squeaky oink and they go through their somewhat limited repertoire or “pinks”, “gueenks”, and “whnks” in no order whatsoever. Every few notes they seem to squabble with one another in a light, grunting and somewhat percussive “rhen-rhen-rhen-rhen” that fades either to brief silence of more “gueenks”.

Great Frigatebird: The most Jurassic sounding of our island, in my opinion; their calls from the sky sound recall something out of a Steven Speilberg film. A scratchy series of clucks “whuk-whuk-whuk-whuk-whuk” announce their presence not unlike a car alarm. If you’re near them on the ground, sometimes you’ll catch a deflating hiss or a rapid hollow bill clacking even more clamorous than the Laysan Albatross’. If there is a group of young birds expecting food from an adult, the atmosphere becomes engulfed with scratchy prolonged screeches that may as well be coming from a set of banshees in the heliotrope trees. The sound of their whirring feathers in the breeze, much like the Laysan’s, could also be compared to a small aircraft skimming by if they pass overhead.

Bristle-Thighed Curlew: Though this is not a breeder on the island, I figured I would make a small concession for their instantly recognizable call. They make a clear “WHEEoWHIT” whistle, similar to what you would do if you were trying to get someone attention from a distance.

Tristram’s Storm-Petrel: Not very common, but they make their presence known late at night or early in the morning. The only call of theirs we seem to hear is a distinctive and somewhat erratic and rolling “hurh-hu-hur-hu-hu-huh.” It has been compared to a monkey chuckling under its breath.

This is not by any means a comprehensive list of all species or all sounds of those listed, but rather an accumulation of favorite observations. Seabirds are not known for the beauty of their voices, but for us they have come to mean home. Even though I described some as banshees and accused some of ear-damaging tones, they all bring a sense of joy and familiarity to the island. The noises that surround us become as much a part of our island as the sand underfoot and the ocean on the horizon.