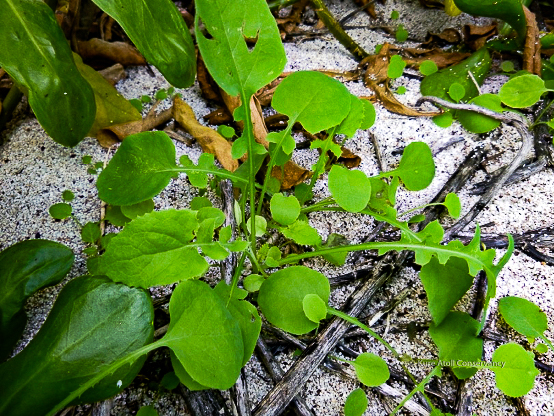 Sonchus, a non-native plant, is not a true thistle. Instead, it is a member of the ‘tribe’ dandelion. It is nearly dimorphic, with coarse, pointed leaves when growing in exposed areas, tending towards soft, rounded leaves when growing in shade. It is uncommon but somewhat widespread, occurring from the southern part of Southwest Dunes, at Radar Hill, in camp, and in the northeast of the island. It occurs year-round.

Sonchus cotyledons are roughly spoon-shaped with microscopically toothed margins and a short narrow flanged stem. Later leaves have long stems and the teeth on the margin become somewhat more apparent. Both of the photos below are of plants found growing in shaded conditions.

At later stages, some leaves will be heavily dentate and the stems develop more complex flanges. The plants shown below were found growing in heavily shaded conditions, and have very soft, light-green leaves.

In unshaded conditions, Sonchus leaves are more divided and pointed. Leaves grow radially from a central stem, are a coarser, and darker green. Sonchus flowers are yellow and grow on stems which when cut exude a milky white sap.

Sonchus produces the same fluffy white seed heads that we associate with dandelions. A single seed head produces hundreds of seeds and a single plant can produce dozens of seed heads. You can imagine that a single seeding plant can re-seed much of the island in the right (or wrong) conditions.