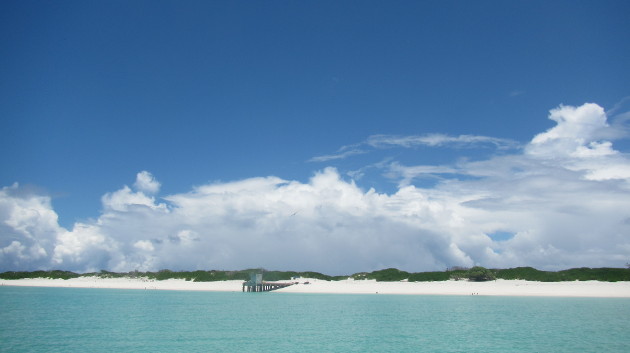 Once upon an atoll…

Adventure stories were always my favorite childhood tales. The ones where the protagonists go on a long journey and wander through strange lands encountering abandoned buildings, friendly strangers and incredible natural wonders along the way.

The past few days have been a whirlwind of new experiences and as I try to find the familiar within each new task, I feel like my childhood bookshelf has come to life.

Our team left Midway Atoll at 5:00 pm (HST) aboard NOAA’s ship, the Sette and within 30 minutes, we were asked to leave an off limits deck as we pulled away from port. The safety rules, regulations and strict time management practiced by the sailors are incredibly intimidating and left me feeling like a small child on The Voyage of the Dawn Treader in the Chronicles of Narnia.

In the morning, the sailors and our team gather bleary eyed on the no longer off-limits deck to go over the day’s plan. The staff aboard the Sette seems to have a pretty good grasp on how to use their small boats to move us and our field kit to the island as they have been doing similar operations at each island along the archipelago. Usually, Midway is their last stop before heading to Honolulu, but twice a year, they pop over to Kure before returning to the main islands.

I barely listen to the meeting after the Chief Scientist mentions that we are just outside Kure Atoll. I scan the horizon on all sides of the ship and I can only see waves.

Eventually, I spot the one lone ironwood tree that has been left on Kure to help people find the land, as the island is flat and near impossible to see from sea level. As my small boat speeds towards the island, the captain shakes his head from side to side and tells Eryn and me that he can’t imagine being dropped off and left for six months. We tell him that after a night on his very rocky ship, we can’t imagine living on a boat.

It takes most of the day to shuffle gear from the ship to Kure and Kure to the ship. The amount of gear that is moved around in eight hours is impossible to describe. However, the camaraderie and bustling nature of the day seemed like something straight out of the Shire (think JRR Tolkein’s The Hobbit and The Lord of the Rings trilogy). The team that just spent 6 months on Kure spends their last day undertaking hard labor and they manage to smile and talk story throughout. A few people who work for NMFS come ashore to check on Hawaiian Monk Seals but they also lift endless buckets and push wheelbarrows from the beach to camp and back again.

Just before sunset, the small boats collect the final bags of marine debris as well as the summer field crew. Tired and now alone, our winter field team walks back to camp together.

The three-minute walk probably feels like returning home for a few of our seasoned crewmembers. However, as a first time Kurean, I feel like Goldilocks, deciding to make myself at home in a few abandoned buildings that sit in a clearing that is only visible after stumbling along a path lined with large shrubs.

As I make a cup of tea, I try out a few coffee cups. One feels a bit small. One seems a bit big. There’s one with an orange handle and a butterfly painted on that feels just right.

I find myself poking around the left behind items. Does this raincoat fit? It’s a nice color and doesn’t smell too bad. My room’s previous tenant left behind some incense and a hat. I light the incense immediately and wear the hat while doing so – I love them, thanks. I rearrange a few of my items around the room but don’t make much progress, as I’m exhausted from the day of heavy lifting, new friends and too much sun.

I put sheets and a blanket on the bed and sit down to test it out. If Goldilock’s three bears show up tonight, they’ll probably find me asleep in their bed too.

Featured Image:  This is the first close-up view of the Kure Landing for all Kure visitors. The pier hosts all comings and goings and is a great place to watch sunsets and take measure of oncoming weather. The main camp is roughly 100 yards through the notch in the dunes (just right of the canopy).