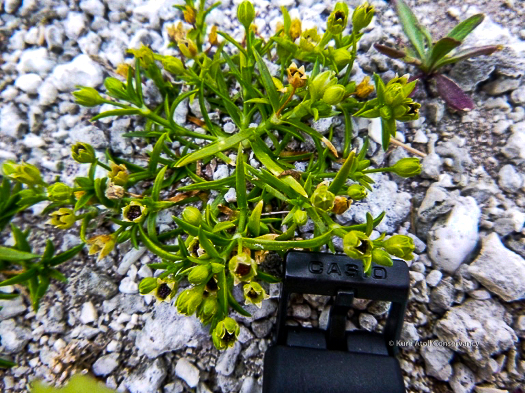 Sagina is a small, fleshy non-native plant with linear leaves growing in multiple rosettes from a central stem. It is seasonal, first occurring in November or December. It is fairly common in West Turnaround, Road to Runway, and Camp RAs.

It is not clear if Sagina has distinctive cotyledons. Leaves erupt in pairs; the second pair rotated 90 degrees from the first, later pairs rotated at intermediate angles forming a rosette.

Each Sagina flower turns into a small cup full of tiny seeds. The seeds are about 0.5 mm in diameter, dark reddish, and roughly kidney-shaped.