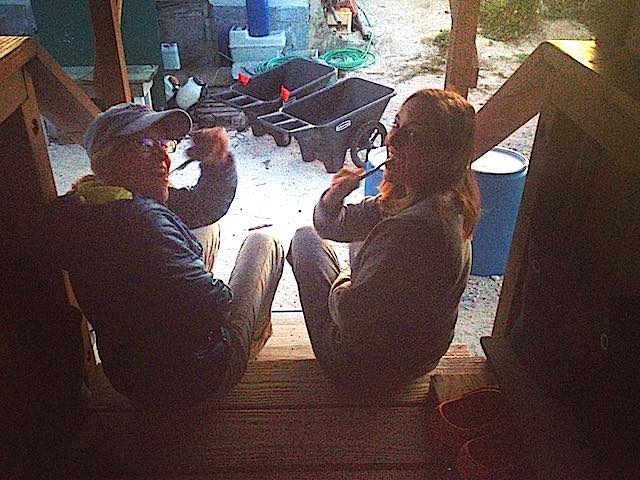 Life on a remote island seemingly falls into a consistent routine especially when considering how little else there is to get up and go do besides what is in front of you. Over the past several months there has been a common trend for routines within camp and between the crew.

Most every day like clockwork I wake to Andy filling the kettle at 5:52 AM at which point I roll out of bed from the back of the bucket room and join him in our synchronized efforts to make a cup of coffee and bowl of oatmeal. As he checks the emails for the morning and I eat, Jill and Zack arrive to build their bowls of granola before being followed by Emily and Mel after I’ve left the kitchen. Virginie is shortly behind and customarily eats her breakfast outside. Last in is Amanda, preferring a little extra sleep and hits the kitchen a half hour before we start work.

By 8:30 AM, Andy and one other are off making herbicide for the day and the rest of us split up to conduct our daily duck checks at each guzzler and seep. Once we return and reconvene, we head out as a group for our morning round of treatment and can expect to be back for lunch come 11:30/12. We treat again after lunch and Friday’s are usually broken up into other tasks like nursery/out-planting work and seal/shorebird surveys to finish out the week.

When it comes to treatment rotations, we follow a routine for where we’re treating each week. It’s easy to know what you’ll be doing. Start a scheduler with Cenchrus Patch and Fledging Hill before doing Camp and Anunu one after the other. Then ‘mow down’ the central plain before making it to the north end of the island, into Booby Acres, knocking off RA 3, 4,5, 6, and those around Radar Hill, pushing down along the Poles, and finishing off the scheduler with the Sectors and heavier naupaka RA’s like Oblivion and No Man’s Land.

Dinner cycles through the same rotation between the eight of us and though the meals change and vary, you expect to eat around 6:30 PM and sit around talking until a final motion to go do dishes. Once we’re back in it’s either a few episodes of Parks and Rec at the start of the season and now Seinfeld and then on the weekends a group game or movie if we don’t just sit around talking.

It might sound boring or too rigid but when you think about it for us, it helps keep a flow to the simple life we’re living and you hardly find time to get caught up in what you don’t have or in finding something to do. You know the expectations, you know what people are doing, and it just makes sense on a little tiny island. The birds, weather, and plants provide us with enough change though they follow their own yearly routines as well.

Life after Kure will be a major adjustment, seven months of habits that will come to a stop and far more to decide upon and handle when we’re back in the ‘real’ world. Maybe that’s why some of us choose to return or spend back-to-back seasons on Kure because you get so used to it and the thought of having so much more can be a bit rattling.