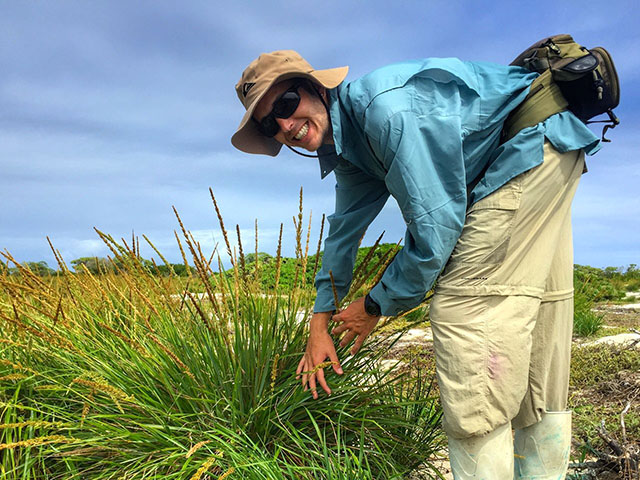 Verbesina encelioides. Cenchrus echinatus. ‘Alena. Kawelu. Sweet Alyssum. Button Sedge. Shrubs. Grasses. Sprouts. Seeds. The list goes on and on. The characteristics start to blend together, your brain reaches a point of plant overload and you wonder how you might ever do what is asked of you. The simple task of finding a weed is a whole lot harder on Kure. For many who have spent time in a garden or backyard pulling weeds, the idea of weeding seems relatively easy when they seem to stand out so simply amongst what you expect to be there. That isn’t entirely the case here on Kure.

For those not yet aware of the goal of this project, we, and a long list of many others before us are here to restore Kure to its native habitat. Simply, the project is for making things pono. That is the Hawaiian tradition for restoring the natural balance. With a history dotted by military action and human presence without quarantine measures, a number of introduced species made their way onto the island. As with many invasive species, they typically outcompete and crowd out native plants and can quickly overrun an immense area of land. This project is set on a multiyear plan to eradicate all non-native floras. Reason being is that Kure is a critical habitat for hundreds of thousands of breeding seabirds, in particular, large colonies of Laysan and Black-footed Albatross. Unfortunately, the species of plants that were introduced hinder the breeding success of these species amongst a list of others. Our primary target is Verbesina encelioides, a prolific weed that can grow in dense stands of up to 7 feet tall. Deep within the thicket of weeds, an inhospitable microclimate is created in the line of a Dutch oven effect increasing ground temperatures and the humidity within the area to extreme levels. To an albatross chick, this can become unbearable and lead to a bird’s premature death if it can’t thermoregulate or get out. Throw in eliminating suitable takeoff space when first trying to fly, it’s clear to see why Verbesina had to go.

This photo, taken in 2007, shows thickets of verbesina enceloides (yellow flowers, left) just north of the main camp. The dense thickets interfered with the young albatross fledging – they need large open areas where they can spread their wings and catch the wind. After a decade of hard work, the plant has been largely eradicated and only exists in isolated areas.

So when we all signed up and agreed to come help support reaching this long-term goal of eradication, of making things pono, we were handed a long, long list of plants to start getting familiar with. There are Latin names to remember, Hawaiian names to remember, leaf characteristics, branching patterns, target species, native species, that this plant grows here, and that this plant grows there – it didn’t take long to feel a little bit overwhelmed. Studying the names and photos might have been the easiest part though. Once we arrived on the island, you realize just how hard this task really can be. With 200+ acres to cover over a rotating schedule of monitored research areas; there is a lot of space for a plant to hide or pop up in. Some areas are easy, the natives have started to flourish and cover most of the space or the non-natives are easy to spot and pick out. Other areas can be much more difficult. You have to scan an area of thick vegetation looking for the few invasive seedlings that might still be around. With years of dedicated work done before us, the state of things is on the threshold of removing the last few survivors and holding persistence until the goal has been achieved. Thus the level of search and destroy has taken a greater height than just targeting a huge stand all at once. But the task isn’t impossible. You can clearly see the progress we’ve already made and the helpfulness of 7 sets of eyes covering a single area.

The challenge poses its own form of motivation. Finding the few chance weeds scattered here and there is rewarding. You feel each effort, each finds, no matter how big or how small, is leading to the success of what this project is set for. It is an honor to be here, to be a part of restoring balance to a place once so pure, recreating what was once here before. And for some, it’s a step towards removing one less hurdle in the game of survival for these Pacific seabirds. In the face of so many other challenges outside what lies on this island, it’s a reminder you’re doing something to give them the best chance here to one day make it and fly the open skies as they are destined to. It’s why making things pono is so important, why it is our responsibility, our kuleana to be here and do what we do.

With time and intent, standing in a sea of green becomes a little bit easier. You start to notice what you’re looking for. The characteristics and photos you spent hours studying start to make sense. You feel there is hope in our efforts and ground is still being made towards the common goal. We have six months of work ahead of us all. We’re ready for the challenge.