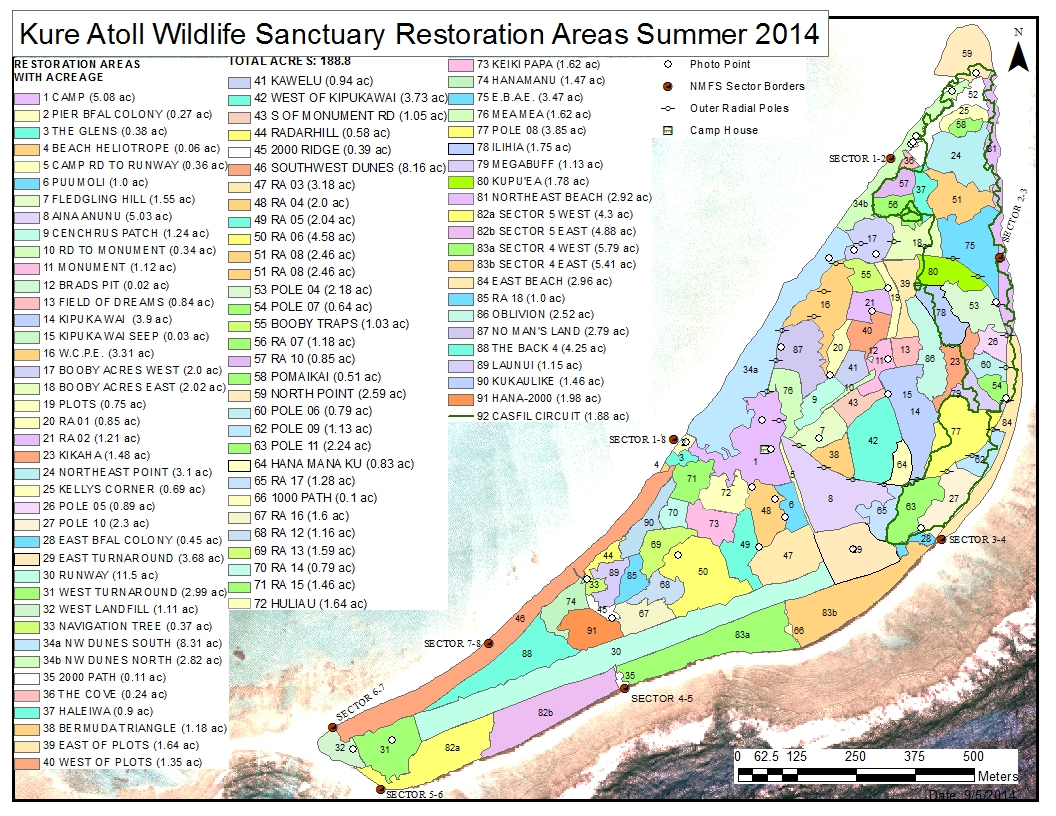 Green Island is a single entity but to those of us who work here it feels more like 91. With no term used more frequently throughout the work we do, the island is broken down into individual Restoration Areas (RA’s) which guide how we approach our work days. At five months in and having finished our third complete island treatment you’d think we would have down the names and locations of each of these places. I feel I finally got the hang of it but still find myself calling ‘Kikaha’ ‘Keiki Papa’ and switching what side of the island each is on.

When this 10-year project started by no means were all 91 RA’s set in place and marked from day one. Until summer 2014, the project focused on selected areas (often those more inundated with Verbesina) and slowly built up with new RA’s each season until the entire island was mapped and being treated. The recent layout takes an average of 5 to 6 week to complete a full rotation and treat all 91 areas. Each RA typically falls into one of three categories and range from anything as small as 0.02 acres on up to the aptly named Runway at 11.5 acres. The three categories used to describe an RA are those primarily of open space, those more heavily covered in naupaka, and those in which the Cassytha infestation was originally in. At the start of each day we wait outside the bunkhouse steps for Eryn’s word on where we’re headed and what RA’s we’ll be treating. With this news comes various reactions as there are places you get excited about and those you dread as everyone obviously will have their likes and dislikes being it an easy time or dodging burrows left and right. For me I’ve come to love Hana-2000 for its gentle naupaka front, sloping ridge, and this image you get as you creep over it into the valley of Hana Manu. Albeit it has it’s spot of treachery with deep underground burrows in soft sand but with patience you come to see past it as you stand atop the RA and take in a panoramic of most of the island.

We treat each individual RA apart from the others around it and take a set of data metrics to document the number and plants present for each treatment. Given this breakdown of lines and borders it would be a weighty task for someone to memorize all 91 areas and the edges that described them in such a short season. Thus to be effective in the limited time we’re here, between GPS maps and selectively placed marine debris buoys/marking flags, it takes a little looking around to find where one RA starts and another one ends. Of course with occasional accuracy errors on a GPS or a moved buoy or two there was plenty of discussion of “Wait, here?” when we first started. If you saw the map of how these 91 intricate puzzle pieces are set together and the boundaries that surround them, you’d understand why it could get confusing without guided hands as we have had in Andy and Eryn.

I know the topic might not seem like much but to us it’s as close to say visiting another city as we’ll ever get while we are out here. Typically confined to the area of camp, a trip to North Point brings a refreshing glimpse of things we’re not so used to. Furthermore, it has taken me up to this point to finally figure out what most of the unique RA names mean and how they came into being. I feel human beings have an innate urge to name things as it occasionally puts more meaning to something and thus we don’t just look at sequential 1 to 91 as it very well could have been done. Instead, we look at a list that entails names like Pole 10 or 11, RA 01 (which isn’t actually number 1), Camp, The Glens, Southwest Dunes, or the Hawaiian language cohort with the likes of Ilihia, Hana Mana Ku, Huliau, or Aina Anunu. Here is my attempt to describe what all the RA’s are.

Pole 4, 5, 6, 9, 10, and 11 are those RA’s named after and located around the old LORAN tower anchorage points which were replaced with poles as marker points.

There are those needing a little explanation to include The Glens (one I’ve yet to find out about), Fledgling Hill (central plain hill commonly used by fledging albatross chicks for a path to the wind), Cenchrus Patch (area once filled excessively with Cenchrus grass), Brad’s Pit (no, not after the actor but after a loving brother who helped dig the seep for the ducks on the island), Field of Dreams (an area named for the dream of what it might one day look like not covered in Verbesina), W.C.P.E. (West Central Plain Edge), Booby Acres East/West (open area known as Booby Acres Proper predominately used by brown and masked boobies for nesting), Plots (the original plot for which Verbesina treatments were conducted in), Kelly’s Corner (named after a dear friend of the crew), The Cove (a small inland pocket of Black-footed albatross), Bermuda Triangle (my guess is the presence of Bermuda grass and its triangular shape but maybe someone got lost there once), Booby Traps (burrow filled area alongside booby acres west), E.B.A.E (East of Booby Acres East and our closest thing to online shopping), Mega Buff (I think it’s due to the swollen bicep appearance the shape its outline takes but it could just be a mega buffer along the Cassytha zone), Oblivion (it’s just lost out there), No Man’s Land (Because you just shouldn’t go there), The Back 4 (a 4 acre plot on the far back corner of the runway and one of the last named also in reference to the back 40), Hana-2000 (jointed next to Hana Manu but with a starting point at the 2000 meter marker off the runway).

Then last of all are the Hawaiian based names and their meanings as follows: Mea Mea (unknown), Launui (Big Leaf–for the dense naupaka and giant heliotrope that are in it), Kukaulike (Potentially of a rainbow or spring), Aina Anunu (Anunu (native Hawaiian vine) Land), Haleiwa (House of ‘Iwa (Frigatebirds)), Hana Manu (Valley of the Birds, the middle of the RA is an open valley once filled with a number of Laysan Albatross), Hana Manu Ku (Miraculous Spot, quaint naupaka grove nestled between West of Kipuka Wai and Kipuka Wai), Huliau (Turning Point), Ilihia (Stricken With Awe and Reverence as by beauty), Kawelu (Hawaiian name for Eragrostis variabilis bunch grass which grows abundantly there), Keiki Papa (Children of Papa/earth), Kikaha (Soaring or Meandering), Kipuka Wai (Seep, first seep dug for the Laysan ducks), Kupu`ea (Life of Growth), Pomaikai (Blessed), Pu `u Moli (Albatross Hill).

By now I feel you all should feel quite familiar to everything Kure and ready to suit up and treat the island yourselves. We’re soon headed out so I think you’d be fine replacements.

-Disclaimer: Several RA meanings are under the belief of the author and may not follow complete accuracy for their original creation but this is how I have come to see them.