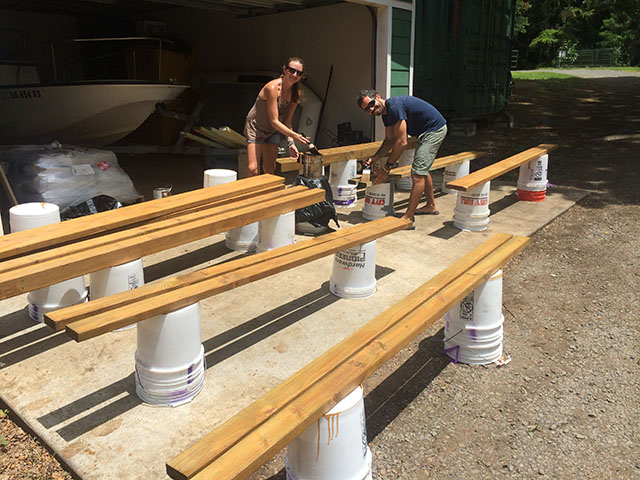 Today, Andy and I are staining wood for the Laysan ducks that were recently translocated to Kure Atoll. Maybe that sounds funny. We’re taking some lumber with us in order to build another guzzler to collect fresh water for the ducks.

In order to meet the strict quarantine measures for the island, we are staining the wood to fill in gaps where insects tend to hide. Before we leave, the wood will be frozen as a second preventative measure to make sure any insects or possible eggs are killed.

As we paint, I mention to Andy that most people don’t seem to know where Kure Atoll is or even that it is part of the Hawaiian archipelago. Andy has already spent a field season on Kure, which is probably why he seems nonplussed, ‘oh yeah, that’s common.’

Currently, Pele resides in the crater of Kilauea on the Island of Hawaii. Kilauea has been erupting since 1983 and is continuously spewing out lava which becomes new land as it cools.

The island of Hawaii is currently sitting over what is known as the Hawaiian Hot Spot. It is a location where the Earth’s core is thin and magma or molten lava flows freely to form new volcanoes. This Hot Spot doesn’t move, however the Hawaiian Islands are located within the Pacific Tectonic Plate which does move – at a rate of 5-10 centimeters to the northwest each year.

This hot spot/tectonic plate combination is responsible for forming the Hawaiian Archipelago. As an island moves away from the hotspot, the lava in each volcano eventually dries up and becomes dormant. In addition, the islands start to erode from high intensity waves.

If you look at a map of the Hawaiian Islands, it is easy to see that with an increase in age or distance from the island of Hawaii, the islands decrease in size. There are actually quite a few more islands that are attributed to having been formed by the Hawaiian Hot spot and are now submerged that exist past Kure Atoll. This extended chain of islands is referred to as the Emperor Seamount.

If any readers want to get extra geeky and read more about the formation of the islands, check out www.soest.hawaii.edu. This website has some great graphs, more details and is where I double checked my facts.