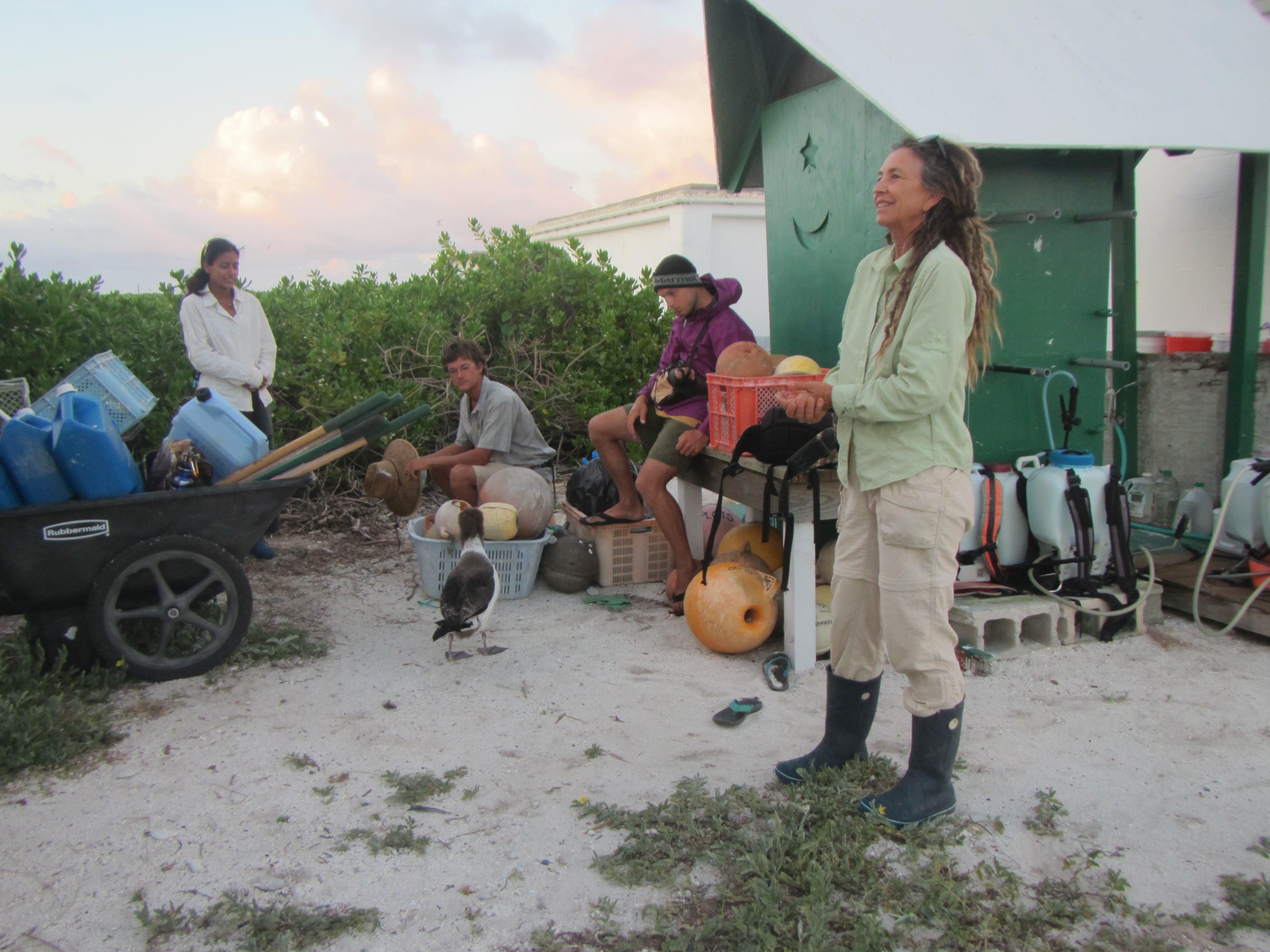 It’s 7 am. The breeze is lightly blowing the sarong I have stretched in front of the window as a makeshift drape. I can see the sun rising high in the sky. The heat radiating off the ground lets me know it’s already hot out. As I lay in bed slowly waking up I notice that it has gotten rather quiet outside. All the typical chatter seems to have dwindled. I sit up and look outside my window to the “backyard” of the bunkhouse. I am expecting to see [birds] dancing with [albatross] necks stretched high into the sky, chests pushed forward, and wings displayed. I even anticipated hearing songs of recognition and excitement full of low trumpet-like groans, high pitched squeals and plenty of bill snapping. Instead, it was quite a different scene from when we first arrived.

Scattered across the yard are no longer football-sized fluff balls that pass as Albatross chicks, rather, sitting patiently are almost fully-feathered chicks as they wait for the rest of their down to fall off and their adult feathers to come in. Long gone are the “unemployed” (non-breeding) Albatross adults with their dances and constant chatter. With the mating season over, those who were unsuccessful have returned to their solitary lives at sea; another year will pass before they step foot on land again to find that perfect mate. The other adults—that is, those who were successful at finding a life-long mate and hatching a chick—continue to return to Green Island albeit less and less frequently. As the chicks develop more every day their parents must fly to greater lengths to find foraging grounds that will provide them with enough food to stifle their young’s ever-growing appetite. As such, the adults spend more time at sea and less time on the island.

As the chicks’ fledging nears and they will soon be “mobile”, it is now time for our annual Albatross count. The count will serve as a census for the population of Laysan Albatross and Black-footed Albatross chicks here on Green Island at Kure Atoll. The winter crew laid the groundwork by conducting a similar census of the nests laid per species across the island. Now it is the job of the summer crew to head out and track down every chick that has survived from hatching to now. Much like we treat the RA (restoration areas) we will span across all areas of the island and search every part to make sure we have counted every chick. All of the island’s RA’s are broken down into 8 different sections and the crew is separated into teams to tackle all areas, simultaneously. In a typical work week, we cover roughly 20-25 acres; this week we will be covering a little over 200. Without the burden of our spray packs strapped to our backs, we will be agiler out in the field, moving swiftly in and out of the naupaka as we search for chicks. Our species of interest being much larger than small ground cover and knee-high plants give us an advantage, allowing us to move at a much quicker pace than usual. There is one exception, however, these subjects are mobile and often like to move into the shade or to go tussle with a neighbor. As such, it is imperative that we work as a team to make sure all chicks are accounted for in the correct areas and are not recounted. By taking separate counts for each RA within the 8 sections we can assess population densities across the island.

The days flow like any other. We hui (meet) up around the shed in the mornings to game plan and collect our tools before heading out to various areas across the island. We have traded in our spray packs for cans of survey paint and wands. The spray paint will help us to keep track of what chicks have been counted and which haven’t. We use the survey paint to mark the locations of the chicks’ nests. As usual, we all have our butt-packs and vests strapped to us carrying all the other necessary equipment; GPS, radio, batteries, maps, flagging tape, clickers (for counting), sunscreen, water and, of course, snacks. Working with neighboring groups, we try to clear areas adjacent to one another at the same time to avoid recounts. It’s a long grueling week. As Dr. Seuss said “One fish, two fish, red fish, blue fish…”. So goes our week, “One tross, two tross, white tross, black tross…”.

In the end, we face the facts and lay the numbers out on the table. The winter crew counted roughly 27,000 Laysan Albatross nests and 2,700 Black-footed Albatross nests. The summer crew has documented roughly 8,000 Laysan chicks and 1,200 Black-footed chicks. Historically, the Black-footed Albatross have had about a 40-50% survival rate here on Green Island. The Laysan Albatross, however, typically have a survival rate higher than the current 30%. So, what is happening? Every day that we are out in the field removing invasive species we are making the habitat better for all the resident bird species here at Kure Atoll. With that, habitat loss can be ruled out for our population, at least. So then what can the limiting factors be? Looking at the bigger picture, we need to consider food availability, pollution rates in the Pacific and most of all climate change. We have a long way to go before these animals are safe and free from harm. Will it ever happen? The least we can do is try to lead less impactful lifestyles and continue our efforts to restore these fragile areas. We get daily reminders as we head out into the field. Those of us on Kure face the reality of the situation daily when we see dead chicks with stomach cavities full of plastic or boluses (regurgitated indigestible food particles) strewn with bottle caps, nurdles, and fishing line. Change needs to happen and we can all have a hand in making that change a reality.

What is your current* favorite plant/ animal on Kure?
Allison: ‘Akulikuli and ʻIwi (Great Frigate Bird) because they are so intimidating and beautiful all at the same time.
Keelan: Makaloa because I don’t get to see it often and Laysan Albatross chicks because of their current hairstyles… mullets.
Leah: Naupaka because it reminds me of the canopy forest and how the birds utilize the different areas and White terns because they are spunky and feisty.
Kelleigh: Popolo because it’s the underdog and it’s doing so well here, and the Laysan Dino- Ducks because they are adorable and very charismatic.
Vladimir: ‘Akulikuli and the elusive, predatory, Short-Eared Owl with all of it awesomeness.
Morgan: Naupaka because it has made me laugh the hardest at myself since we have been here and Laysan duck-ducks because they are so cute! Also, Christmas Shearwaters for the fluffy brown chicks.
Naomi: Naupaka for keeping me on my toes… or, rather, off on most days and Grey-backed tern chicks for their camouflage and stealth.
Brett: Makaloa because there are so many uses for it and Sooty terns because I made a connection with them on the runway.
Matt: Koali awa for the vibrant colors of their flowers plus the arthropods they attract and Bonin Petrels, simply put they are just so cute, plus, they are very driven and they growl. Also, any kine shark because they fascinate me.
*Disclaimer: Our favorites change daily/ weekly. We love them all!