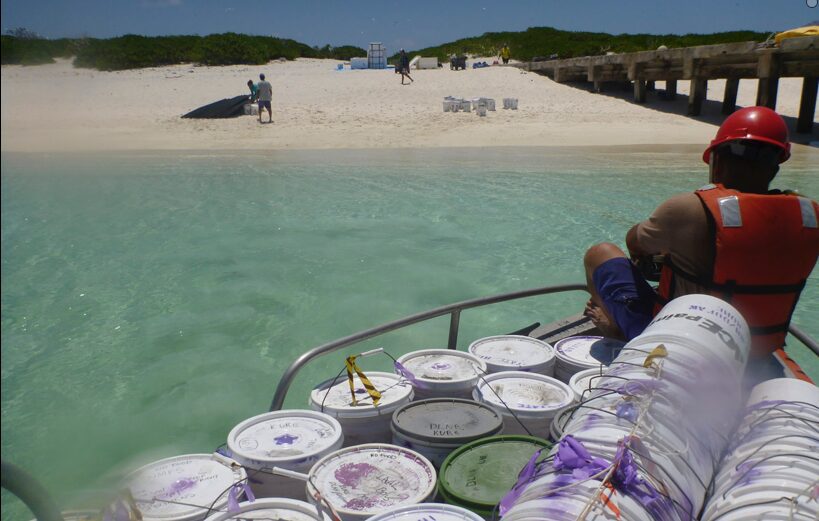 Hello all!
We’ve completed our first few days on Kure! It has been so amazing, overwhelming and beautifully exhausting all at the same time. We left Honolulu on April 4th aboard the cargo ship, the Kahana. The minute we crossed into the Marine Monument everything transformed. I could feel my life changing as we cut through the water and over Tropic of Cancer, separating Po and Ao. The Hawaiians believe that this boundary is the dividing line between the land of the Gods and that of the mortal world. Po is where life is born. It is an area of darkness where the Gods reside. I don’t feel like I am in an area of darkness however, there is so much abundant light and life here. After a couple of days at sea, we made our first stop at Tern island on April 7th. This was the first time any of our crew would step foot on an island in the Northwestern Hawaiian Island chain, it was incredible. Tern Island is smaller than Kure but an equally important breeding habitat for Laysan Albatross, Black-footed Albatross, Noddies, Boobies, Sooty terns, White terns, Red-tailed Tropic Birds, and the list goes on. Not only were we excited to see all the birds, but the majority of the crew was also elated to step foot back on solid ground. It was short-lived however, we only had about an hour on the island and then it was back to the ship.

We reached Midway Atoll two days later, on April 9th. This is where the real fun started. We were in port at Midway for a day and a half and definitely made the best of it. Midway Atoll is an area of great historical and environmental importance. The battle of Midway was a huge turning point in WWII and allowed the US to regain some much-needed ground in the Pacific against the Japanese forces. The Atoll is freckled with reminders of this heroic clash as frames of old buildings and relics from the war lay scattered across the area. Midway Atoll is home to the largest colony of nesting Laysan Albatross in the world. There are birds everywhere, as far as the eye can see. On the ground and in the air. Nesting in the Naupaka and fishing in the ocean. All the wonder and excitement we felt on Tern was ten-fold on Midway. It is truly a land for the birds. Each one busy courting, foraging or caring for their young.

It is immediately evident that we as humans are now the minority. We’ve stepped into a highly structured society of feathered families hard in their daily lives. As mating dances commence a wild show is unfolded before our eyes. The albatross primarily “dance” on the ground, wandering around two-stepping with one another until they find that perfect match. Their dance consists of a set of songs perfectly sung for one another, accompanied by stretching to show off their chests and wings. It is a magnificent show to watch. The red-tailed tropic birds put on an incredible aerial display, swooping in and out, and spinning around each other, fluttering weightlessly midair to shake their bright red tail feathers at one another.

The team on Midway gave us a wonderful welcome to their home in the Pacific. Upon arriving at Midway Atoll both teams offered an oli (chant), the Kure crew asking permission to enter the space and the Midway crew welcoming us to their home. We received a tour of the island along with visits to their restoration areas and nursey. They shared success stories of their restoration areas and new-found planting techniques. The midway crew also prepared an Awa ceremony on the beach to bring our two crews together on our new journeys. The Awa ceremony consists of drinking the Awa tea (made from a powered root) and sharing in your stories/ reasons for coming to the Northwestern Hawaiian Islands and all you hope to gain from the experience. A rather emotional evening, we came together and opened up about where we each have been and where we are going. After we storied, we helped the Midway team prep some Makaloa (native sedge) that will be used to weave into the ceremonial mat. To finish the ceremony we all took an icy plunge into the ocean to cleanse ourselves and start anew.

We reached Kure on April 11th. Once all of our gear had been offloaded from the Kahana and onto the landing craft it was then hauled up the beach and into camp. We offered our oli to the winter crew asking permission to now take over this magical space and they responded with a beautiful chant agreeing to allow us in. The power of the oli radiated from person to person. The new crew excited to begin life on Kure and scared to leave our old ones behind. The old crew eager to return to friends and family yet devastated to leave.

It was the most exhausting and rewarding experience to have to haul all of our food, water, clothes, and gear up the beach and into our camp. We had to work for all of it. Lifting, carrying, pushing and rolling we helped each other get all our gear to camp. The next two days were spent with camp orientation and food inventory. We are all tried and bruised and sunburnt but so thankful to be here and excited to see all that Kure has in store for us.