The ka‘upu or black-footed albatross is the smallest albatross (Family: Diomedeidae) found in Hawai‘i. Adult males and females are entirely black except for a narrow whitish area at the base of the bill and another under the eyes; ten percent of the individuals also have a white rump and under-tail coverts. Like all albatross, ka‘upu (blackfooted albatross) are accomplished fliers using dynamic soaring to cover great distances. Ka‘upu (black-footed albatross) feed on the surface by seizing prey while sitting on the water, and will “tip-up” very similar to ducks. Like many seabirds, uses a well-developed olfactory sense to locate food. Ka‘upu (black-footed albatross) form long-term pair bonds and exhibit a high degree of nest site philopatry. Breeding occurs in large colonies and nests are placed on open, sandy beaches or dunes. Pairs engage in noisy, ritualized courtship dances. Pairs remain together until the death or disappearance of a partner but do not breed every year. Ka‘upu (black-footed albatross) nest in scooped out hollows on the upper parts of sandy beaches. In Hawai‘i, eggs are laid in November and chicks fledge in June and July, and like many seabirds, only one egg is laid per year. Both male and female incubate egg, and brood and feed young. Young birds do not return to land until their third year after fledging. These birds do not breed, but dance, build nests, and prospect for mates. Age at first breeding is at least 5 years old, and the oldest-known black-footed albatross is at least 43 years old. 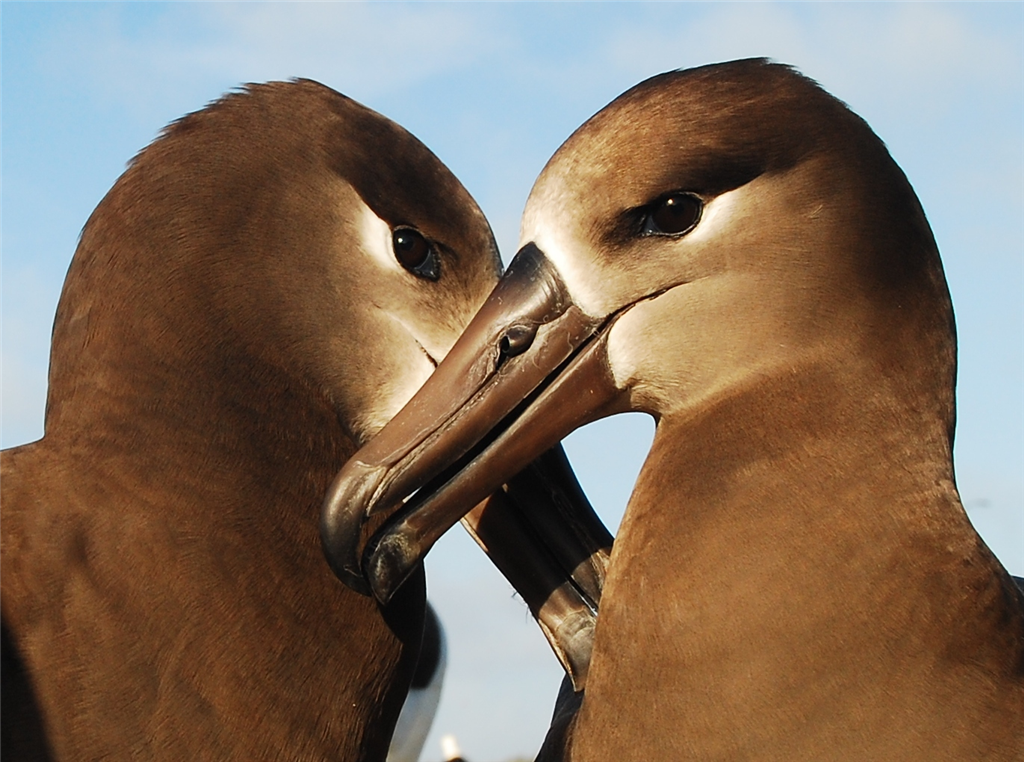 Location and condition of key habitats

With the exception of a few breeding colonies off Japan, the breeding distribution of the black-footed albatross is restricted to the NWHI where breeding occurs on all islands. Historically, bred on Johnston, Marcus, Wake, Volcano Island, Marshall Island, and the Northern Marianas; no evidence of historically breeding on MHI. Non-breeding range is the northern Pacific Ocean.

In Hawai‘i, the population is estimated at approximately 55,000 breeding pairs; 95 percent of the world’s population. Majority of individuals breed on Laysan (19,500 pairs) and Midway (20,400 pairs).

Historically, feather hunters decimated populations. Occupation of Pacific islands by military during World War II also took a heavy toll on this species. For example, during the 1950s and 1960s tens of thousands were killed at Midway to reduce collisions with aircraft.

Longline fisheries now are responsible for the death of most ka‘upu (black-footed albatross); between 1990 and 1994, it is estimated that greater than 23,000 individuals were killed on longline hooks set by the north Pacific swordfish fishery. An estimated 1,800 were killed annually between 1994 and 1998 by the Hawai‘i longline fishery.

Organochlorine levels high enough to result in eggshell thinning and embryonic defects have been detected in ka‘upu (black-footed albatross).