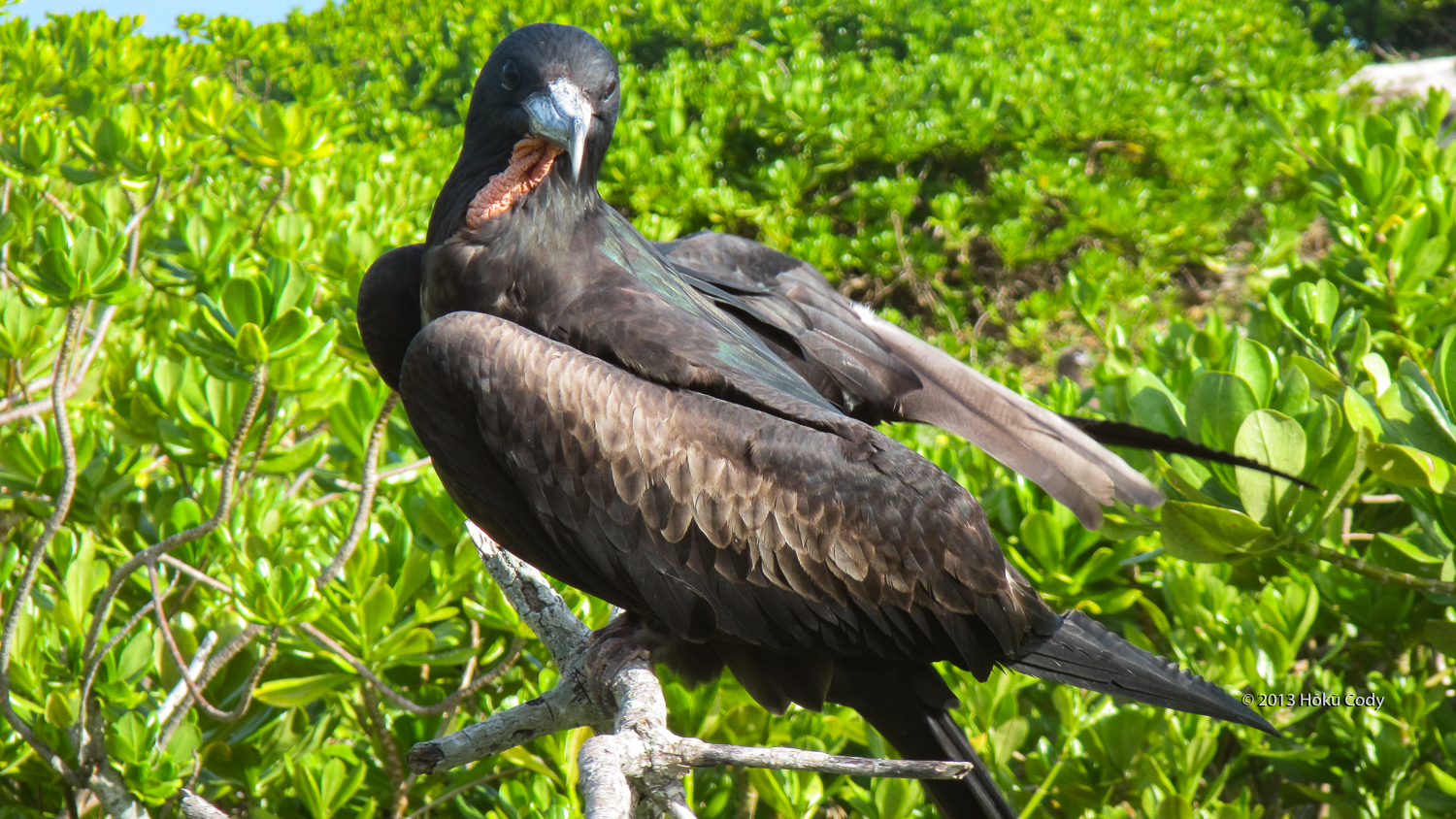 The ‘iwa or great frigatebird is a large, graceful seabird (Family: Fregatidae) related to boobies and tropicbirds, with a pantropical distribution. Five ‘iwa (great frigatebird) subspecies are recognized, and one (F. m. palmerstoni) breeds in Hawai‘i.
Individuals have slim bodies with a long deeply forked tail, a long hooked bill, and almost useless legs and feet. Adult males are almost entirely black, with varying amounts of a dark green sheen on head and neck; during courtship, males inflate large, red gular pouch. Adult females are larger than males, and are black with a white breast patch and a gray throat; both sexes may have a buff bar on the upper surface of wings. Flight is characterized by long periods of soaring.

An adept aerial flier, the species obtains some of its food by harassing other seabirds until they regurgitate their prey. Although ‘iwa (great frigatebird) captures most of its own prey, this behavior inspired both its Hawaiian and English names: ‘iwa means “thief” and “frigate” refers to the fast ships used by pirates. They often forage far from land alone or in pairs but will join mixed-species feeding flocks, especially ‘ewa‘ewa or sooty terns (Sterna fuscatata) and ‘ua‘u kani or wedge-tailed shearwaters (Puffinus pacificus), feeding over schools of predatory fishes. ‘Iwa (great frigatebird) take prey on the wing, seizing it by dipping bill into water or from the air.

In Hawai‘i, their diet primarily consists of flying fish and squid. They typically nest in colonies, often with other species, in the range of ten to thousands of pairs, and construct platform nests in low bushes. Unlike many seabirds, ʻiwa pairs usually switch partners every breeding season, likely because females often only nest every two to four years. Both parents collaborate in the incubation, brooding, and feeding of their chick. Post-fledging feeding is provided by female for up to 18 months. Birds first breed at eight to ten years of age, and the oldest known individual was 37 years old.

‘Iwa (great frigatebird) breed throughout the NWHI. Large numbers roost on offshore islets of the MHI, but breeding has not been documented. Outside of Hawai‘i, ‘iwa (great frigatebird) nest on islands mainly in the tropical Atlantic, Indian, and Pacific oceans.
Outside the breeding season, adults remain relatively close to breeding colonies, but young and nonbreeders disperse throughout tropical oceans. 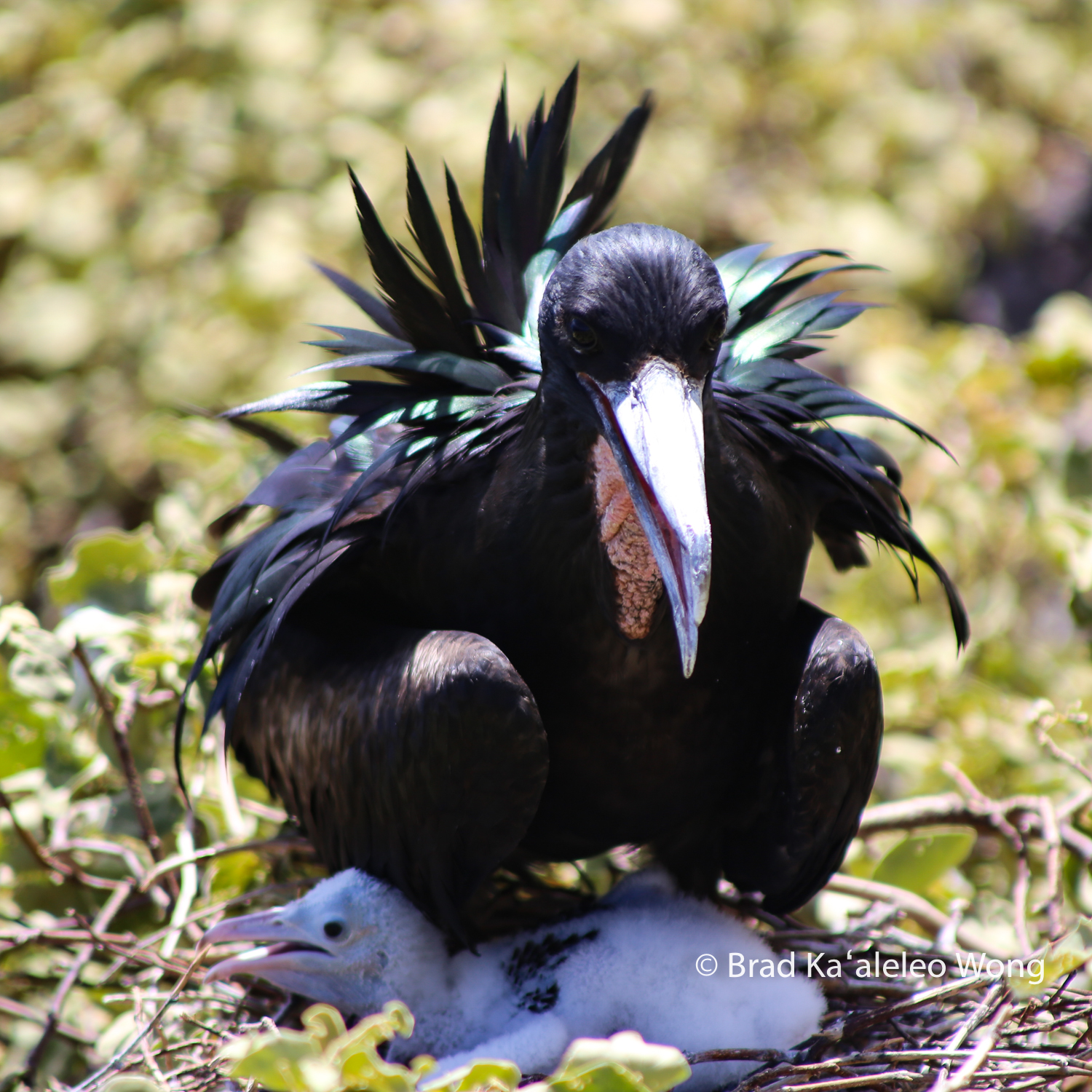 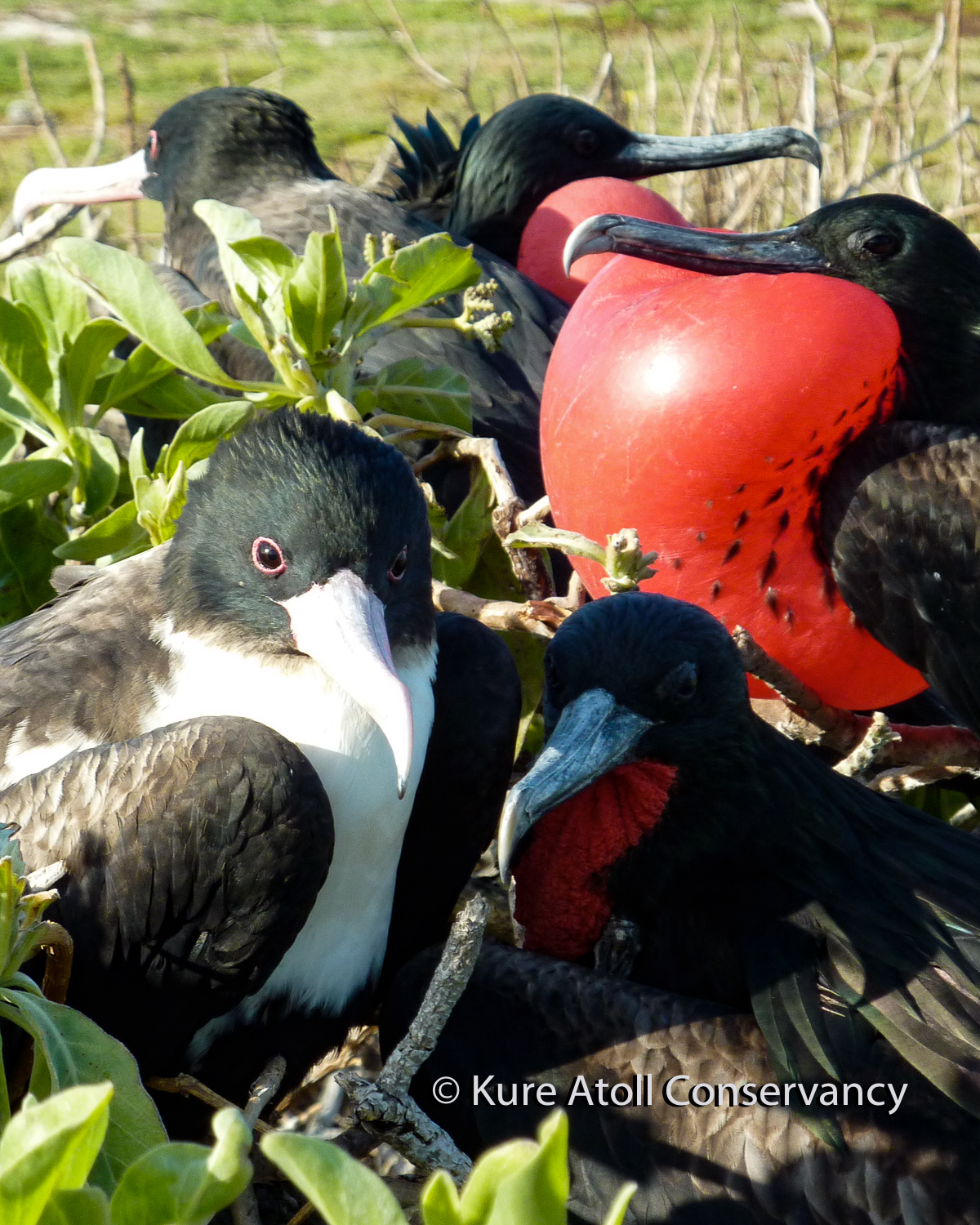 The Great Frigatebird, or ‘Iwa, can be found in all areas of Green Island. Often seen flying high over head, these prehistoric-looking birds are easy to spot on Kure Atoll. Great Frigatebirds build their nests in the tops of various species of bushes and trees, including beach naupaka and beach heliotrope. They are most often found nesting in the heliotrope trees along the north end of the island, though they can been seen perched in the naupaka bushes in all areas of Green Island. Before the ironwood trees were removed from camp in 2009 there would be up to a couple hundred roosting in the trees.