If We Were Superheroes 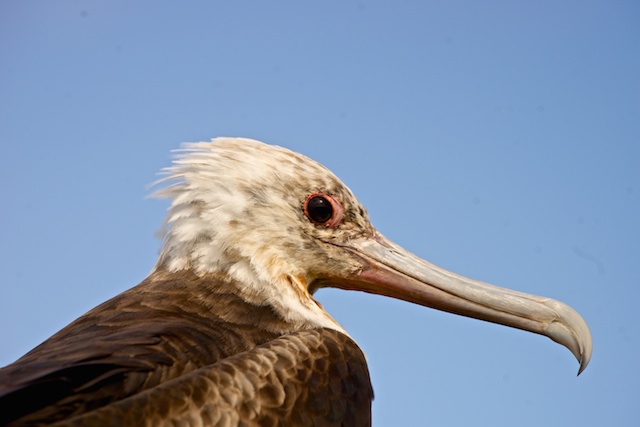 If we become superheroes, Ryan wants to have the power to fly. Martha wants to swim like a dolphin and Andy wants the ability to become invisible. Eryn thinks all of these special powers sound good and believes she could do all three and more with a magic wand. Coryna simply wants to be able to absorb environmental contaminants like PCB and radioactive waste, although she does not want to be Captain Planet incarnate.

I would like to be able to communicate with animals. Mostly because I think it would be fun to have a tea party with a frigate, a fairy tern and an albatross in attendance but also because it would be nice to have the birds help us in our effort to evict Verbesina and other weeds from Kure. Once the birds have agreed to help and we’ve had our tea party, I’m pretty sure the next step will be for me to explain seed dispersal because right now, the birds are working against us and spreading the weeds.

Our main weed, Verbesina encelioides, is a member of the sunflower family and each flower can develop up to 350 seeds. When ready, these seeds easily drop from the flower. Some are dispersed by the plant itself and fall directly under the parent but other seeds passively move and disperse by wind and rain. Also dispersed by the wind, dandelions have developed external structures on their seed that easily catch the breeze and helps extend the distance seeds travel from their parent plant. We don’t have dandelions on Kure, they are just an exceptional example of seed dispersal by wind.

One of our coastal plants, Tournefortia argentea or Beach Heliotrope develops densely clustered seed heads that float when they are swept up by the tides and will grow after they have been carried many miles by the ocean and once again lodge in land. Tournefortia is considered a non-native plant on Kure and competes with Scaevola taccada or naupaka (see earlier blog, The gentleman of Kure) which means it is a target for eradication on Kure. However, Tournefortia is not considered a weed on Midway Atoll which also means the plant will likely keep reappearing on Kure as its seeds can and have been carried by water currents between the two islands. Even though Tournefortia is a rival with naupaka, I like it because it has large, soft green leaves that make for excellent toilet paper. The leaves are also edible but I would only recommend them to someone if they were hungry for bitter cardboard.

Other plants have adapted seeds that are easily transported by animals. One of our non-native grasses, Cenchrus echinatus or Sandbur has seed heads with burs that are sharp and sneaky like fiberglass. These seed heads constantly attach themselves to my clothes and to birds’ feathers who unknowingly spread them around. Other plants have fruits and seeds that are ingested by animals and germinate once they are excreted. Ryan wrote about Cassytha filiformis last week which is a non-native parasitic vine most likely brought to the island by a bristle thighed curlew who ate a seed someplace else. A few months ago, all of us were dealing with the Cassytha invasion by tearing out the part of native plants with vines and moving the infested bundle down to the beach where the vines could not attach themselves to healthy plants which essentially meant the vines would die. The plan would have been brilliant if a handful of frigates hadn’t found the pile of plants amusing. The birds started swooping down, picking up clumps of leaves, twigs and parasitic vines and flying off with their find. It was a frustrating moment barely overpowered by the incredible flying skills of the birds. As usual, the frigates were as obnoxious and endearing as trying to get a toddler to eat spaghetti instead of throwing it around the kitchen. We now have a new technique for moving Cassytha away from healthy plants, but the frigates that day rendered our work futile as small sections of Cassytha that are cut or broken from the parent plant can probably continue to grow.

The more I learn about plants and their various adaptations the more impressed I am by nature. Yet, I am most intrigued by animals. I would like to have been able to ask the frigates to stop their Cassytha spreading antics. I would like albatross to be able to answer when I ask them if they have seen any Verbesina in the area and I would like to be able to understand what the white terns are saying when they attach themselves to space above my shoulder and chatter incessantly. Although, I would also like to be able to fly and swim like a dolphin, so maybe Eryn’s right and a magic wand is the way to go.