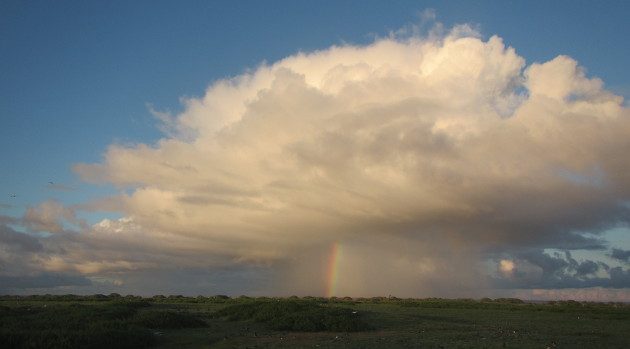 Howzit kākou. Weʻve completed our sixth week and it was filled with birds, literally. Just the other week, there were just a few mōlī (Laysan Albatross) slowly arriving and now they’re all over the place! They came in hot, swooping into camp like jets on Sunday morning. I was in the bunk house for most of the day and each time I went outside, more and more popped up here and there near the bunkhouse. By dinner, camp was entertained by the musical clapping of beaks, high-pitched whistles, honks, and squeaks that sound like they’re saying uh-uh-uh. They are such interesting beings.

We planned to greet the sun as we welcomed the new month. However, it was cloudy on both Sunday and Monday morning. There was a sight on Monday that I’ve never seen before though. As we made our way to the north side of the island (our work site for the week), I saw the sun behind the haze. It was faint, orange-pink and it was as if it were behind a sheet. It was cool. And so, Tuesday was the day. Before we headed out to the north side, we stood outside at camp and greeted the sun. It was a total of eight minutes that we chanted “E Ala Ē” and the sun was fully above the horizon and clear from clouds. Beautiful as always.

This work week consisted of spraying, planting, and even searching for a lost cellphone. We were clear from naupaka this week, yet there was no escape from burrows. Rather than trampling through naupaka, we had to clear the native plants from cassytha (kaunaʻoa) which gets tangled with the plants and sucks the nutrients from it. We completed 37 acres within 4 days (uihā!) since Friday was a holiday. It was amazing that we worked in two RAʻs that had the name of my hometown (Haleʻiwa) and my younger sisterʻs name (Ilihia). It’s funny coming all the way out here and still have pieces of home with me. This is how I know I belong here. It’s destiny.

Throughout the week, we saw the hybrid. Gray, lighter from the Black-footed Albatross. It’s real pretty. We found out some disappointing news about the outside world on Wednesday morning. As we walked to our next RA, our faces were long, tired. However, the sky was as it was covered with cotton candy-colored clouds. That’s when my mood changed. There’s mana in the beauty that surrounds us. Despite disappointments, sadness, fears, and troubles that overwhelms me, this environment never fails to make it all disappear.

Funny things happened on Thursday as we treated RA 03. A Black-footed Albatross flew straight into Coryna while in the naupaka. Then as we were returning to camp from the RA, I was surprised and got a big whack to the right side of my face by a Laysan Albatrossʻs left foot as it was landing in Puʻu Mōlī. I was so shocked. It was hilarious. And to think that we watched the movie “The Birds” last week haha.

Friday was a day of rest. I went up to roof of the camp house and watched the sunrise. It rises later now around 7:10am (8:10am for Honolulu). I love watching the colors of the sky and the clouds change within minutes, seconds too. The horizon was dark orange and then it got lighter as the sun rose higher. The clouds glowed with orange on the bottom and pink on the top. Once the sun was fully above the horizon, the sky then turned light blue. In this moment, as the sun was rising, ʻiwa and mōlī were gliding in the wind with the huge sun shining behind them. The breeze brushed upon my bare skin, chilling my body. However, the sun radiated with warmth. I love the view from the roof. I can see around the whole island from up there. Itʻs insane how we can see everything in this little world of ours – the sunrise, sunset, moonrise, moonset, without any obstruction. We can see everything go from one side to the other side of the atoll. Itʻs a small world, but itʻs our world. Secluded, far from everything. Far from worries, troubles, drama. This here, these are the times when I soak in everything that surrounds me – in peace, contentment, and happiness. My mind becomes clear. My naʻau.. I just feel so rejuvenated. He kuleana nō koʻu. Iʻm here for a reason. Not only for the land and the sea, but for me as well. Letʻs just say this is an unreal experience. Itʻs a meaaaaan huakaʻi!

It was a rainy day on Friday. So I stayed inside all day and read “The Whale Rider.” After that, I watched the movie despite how many times Iʻve already watched it. Except this time I had a different perspective now that Iʻve read the book. I also finished reading “The Notebook” Thursday afternoon. I watched the movie. Same thing, a new perspective after reading the book. Now, Iʻm halfway through my fifth book called “Makai.” It makes me happy ʻcause it reminds me of home and itʻs interesting ʻcause itʻs back in time. Itʻs crazy how Iʻm blowing through these books ʻcause I wasnʻt much of a reader before. Itʻs a new time for this wahine. Iʻm already planning on books Iʻd like to read once I get back home. These books, this place, itʻs all inspiring. Totally uplifting my spirit. Braaaaah, I just trip on how much this huakaʻi has affected me.

Btw, I hope the view of the mahina is just as beautiful as it is wherever you are than it is here. The bigger it gets, the brighter and more illuminated the sky becomes. No lights are necessary. Just the natural glow from the mahina. Itʻs especially prettier now, since thereʻs mōlī all over the place. Just like the stars in the sky, the ground twinkles from the glowing, white feathers of the mōlī. He nani wale!

Anyways gangeh, weʻve come to the end of this journal entry. It was a short work week, but we still got a lot done. It was nice to have some downtime and rest so that weʻre ready to be back on the grind next week. It was another week of happiness, contentment, and inspiration. E like me ka maʻamau, e hoʻopau ana au i kēia puke hoʻomanaʻo me ka ʻōlelo noʻeau o kēia pule. Eia ka ʻōlelo noʻeau: “He pūnāwai kahe wale ke aloha” (Love is a spring that flows freely) – Ka Puke ʻŌlelo Noʻeau a Pūkuʻi #936. Love is without bounds and exists for all. My love grows stronger and deeper for this beautiful place that I now call home. Like I keep saying, this has been an unreal experience and itʻs just the beginning. Iʻve already been inspired and grown physically and mentally within a short amount of time. I have even more aloha and gratefulness for my ʻohana, hoaaloha, and everything in my life. Love is everywhere. Love is life – whether itʻs related to the books Iʻve read, mālama ʻāina/aloha ʻāina, birds and courtship, admiration of beauty, self-acceptance and growth, just everything. Love makes the world go round, my world here on Hōlanikū.

2016-11-12
Previous Post: Zen Gardening in the Middle of the Pacific
Next Post: Hiki Mai Ke Kau Anu (Winter Is Here)