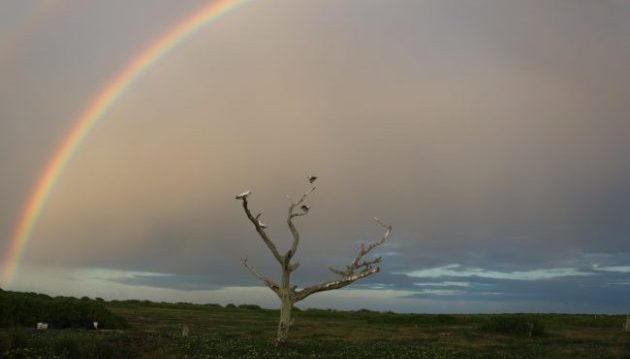 Aloha mai gangeh. We completed our 7th week and we have some exciting things to share. Winter is here! The air is much cooler, the wind definitely picked up, and the sky is covered with clouds. We also had a few showers – and this is just the beginning. It seemed as if the seasons changed instantly. It was hot one day and then bam! We all went to eat breakfast all bundled up on a super windy, chilly morning. The days are also getting shorter now that the sun rises later around 8:18am (7:18am here) and it sets earlier which makes it turn dark fast. Weʻre all back inside our rooms before 8pm (7 pm here).

Another exciting thing is that we spotted the first Black-footed Albatross, Laysan Albatross, and Short-tailed Albatross eggs this week. Love is in the air! Itʻs so precious to see the pairs at their nests. I canʻt wait until the chicks are here. Speaking of pairs, we saw a hybrid trying to woo a BFAL at the beach on Friday. Although, the female totally wasnʻt interested and she just sat their uncomfortably, ignoring him. He really tried. However, he did not succeed. I do give him credit though. Itʻs small kine heartbreaking, but itʻs cute to watch. Some are lucky with finding a mate and some arenʻt. Either way, witnessing love and the creation of life is precious!

I hope you guys got to see the super beautiful Super Moon at the beginning of this week. Brah, talk about a view! We got to see the moon set early Monday morning when we went to move the apex on the beach. It was an incredible sight to see. It was huge, beautiful. It was nice to have some time to soak in that rare moment. We took a crew picture with it in the background. It was an awesome way to start off the new week. In addition to the view we had in the morning, we also saw the moon rise around 7:45pm (6:45pm here) the same night. It was another incredible sight to see. The moon was orange. Although there were clouds on the horizon, it still didnʻt take away from the beautiful sight. We have the perfect view here since there are no obstructions – no lights, no buildings (yuck), no noise. Over here is just perfffffffs.

This work week consisted of spraying, monitoring, collecting, transplanting, and propagating. We now begin work at 7:15am (SST) since the sun rises later. Itʻs also weather-dependent especially now that itʻs windy, cloudy, and rainy in the morning. Now that thereʻs albatross everywhere, we have to be careful when we spray since itʻs so windy. The good news is there wasn’t as much weeds in some RAʻs, but there were a lot in some. It was really nice to do some nursery work after a week of spraying too. Like Iʻve said before, itʻs very therapeutic after taking away the lives of so many plants (the weeds). If you take something, you must give back. We seeded trays of paupera, transplanted pōpolo, and propagated ʻākulikuli. I love being able to watch the stages of their growth. Super stoked on our babies. E ulu aʻe!

Despite a cloudy and windy work week, Saturday was a very nice day. The sun was shining and you know what that means.. time for go beach! The water was calm and crystal clear. I saw new fish that I hadnʻt noticed before at the pier. I also saw an airplane fly above the atoll. There were two long streaks that trailed behind it as it passed over. It actually came to a shock to me when I saw it. Itʻs funny to see and know that thereʻs life outside our little world here on Hōlanikū. Then at night, I kept seeing flashes inside the bucket room and from the window closest to the computer in the camp house and thought it couldʻve been someone. As we began to return to our rooms after watching a movie, I saw the flash again. We all went to check it out, wondering if it could possibly be someone, but it was just lightning haha. It wasnʻt close to us. But it was cool to see parts of the sky light up – small kine eerie feeling to it though.

Anyways, the 7th week blew by (literally) and now itʻs on to the next! Winterʻs here and life is being created. This is an exciting time. Well, e ka mea heluhelu, ua hōʻea kākou i ka pau ʻana o kēia puke hoʻomanaʻo. As usual, Iʻll leave you with an ʻōlelo noʻeau of the week. Eia ka ʻōlelo noʻeau o kēia pule: “Hiki mai ka mālie, a hiki mai nō ka ʻino” (Good weather comes and bad weather comes, too). Weather changes. This ʻōlelo noʻeau is perfect for this week and even for this whole season. Despite the changes of the weather, we still find a way to get things done. The main task this season is to spray, but if the weather is bad thereʻs always alternative things we can do – such as working in the nursery, entering data, constructing things, etc. Thereʻs always something to do and weʻll always be working, moving. Whatever the obstacles are, weʻll find out a way to make it work. Ainʻt no mountain high enough! (literally, since itʻs an atoll hehe).