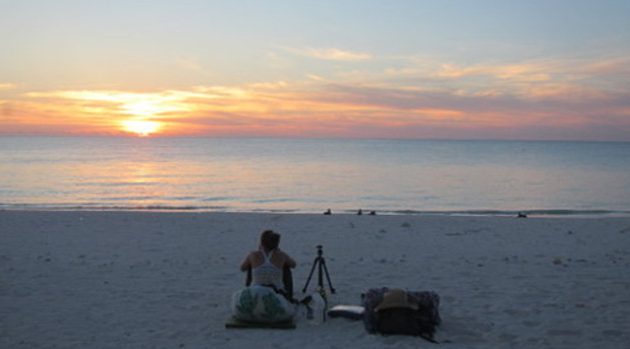 Howzit kākou. Well, it was another week full of rain and high winds. I have become so accustomed to stormy weather, that it felt weird when we had a beautiful, sunny Sunday to start the new week (the calm before the storm). You already know I was out on the beach all day soaking up as much sun as possible. I never go beach for about a month ʻcause it has been so cold and I am usually so exhausted from work. It takes a lot to keep me away from the kai. So, this is a pretty big deal haha.

After a beautiful Sunday, we had another nice sunny day on Monday. Before work began, we had the pleasure of greeting the sun – our first chanting of “E Ala Ē” for the new year since the previous week was full of overcast clouds. After Monday, the week was just stormy – gusts up to 49mph S, SW and swells up to 25 ft. on the north side. Water surged up to the vegetation along the beach, washing away two albatross nests and another mōlī (Laysan Albatross) abandoned its nest on the pier. Minamina nō hoʻi! South Point had washed over, marine debris pushed higher onto shore, everything in camp and around the island was either stored or weighted down. We closed the window shutters for the bunk house and camp house making the camp house feel like a dungeon. We have been cooking and eating in darkness ever since. We also had to turn off the fridge and freezer for a few days because of low solar energy.

The two biggest downpours were on Tuesday and midnight on Friday. The rain pounded on the rooftop, strong wind shook the bunk house, thunder shook the earth beneath us, and light shows glowed in the dark sky.

There was so much action going on. It was exciting – full of amazement with the wonders of nature and the fear of getting shocked. We got 3” of rain from that early morning action – filling our water tanks even more as well as the recently drained guzzlers and seeps around the island. Good news: our trenches [we made for the flooded-out nests] are still working. We had so much water it flooded the sump, moving the buoys used to prevent the albatross from nesting in that area. Sediment filled the sump, covering our recently out-planted pōhuehue. We could see areas where the water carved deeper into our trenches. Pretty nuts.

We ended the week with another overcast Saturday. However, the sun peaked out from the clouds for a bit. Knowing that was my chance to go beach, I took my book and went out only to get sand-blasted. Fierce winds from the south blew sand towards the north side, whipping my bare skin. Despite the slight pain I felt every 30 seconds, I sat there closing my eyes, allowing the warmth of the sun to embrace my body, my curly hair flowing freely in the wind, head lifted to the sky, admiring the elements of nature. That moment made me think of Pocahontas when she was singing “Colors of the Wind.” Her long hair flowing as the colorful leaves fly around her, except my version also includes her whipped by sand!

In addition to the excitement of the weather this week, I was also happy to greet the first full moon of the new year. It is something I look forward to each month. I always find comfort when the mahina shines ever so brightly throughout the night and even when she greets me as I wake up.

I saw something sick on Thursday morning, something that makes me love, appreciate, and embrace everything of Hōlanikū. As I was returning to the bunk house after breakfast at 7:15am, I realized I was standing right in the middle, witnessing the transition of the previous night passing and a new day beginning. On my right, as the sun was rising there was the eastern sky painted in a faint orange. On my left, the big bright moon was well above the western horizon and slowly making its way to rest. Standing there, I was in between night and day, dark and light, old and new, end and beginning. I was watching the sun chase the moon. This island is so small, we can see everything! I have said it many times, but I am always amazed with having the ability to see, feel, and experience everything on this tiny island: sunrise to sunset, moonrise to moonset, changing of wind direction, cloud formations, rainstorms surrounding the atoll, and even the sun chasing the moon. I learn something new about nature, my surroundings, this ʻāina, and myself each day. I will forever be in awe with this beautiful honua.

As for work, we still accomplished many things despite another rainy week. We treated about 25 acres (a little set back from the rain), transplanted, cloned, and out-planted hundreds of kāwelu and Lepturus repens and cleaned the Booby Acres West (BAW) guzzler on the Northwest side of the island. Although we got set back a bit, you know this hammah crew will bounce right back on it and hoʻokō i nā hana! 🙂

Well gangeh, another week of the new year is pau and we are trotting our way into the middle of Ianuali (January). Winter has been pretty action for us here on Hōlanikū. Strong wind, heavy rain, rolling thunder, flashing lightning, and all the work that adjusts in response to it. A winter full of excitement, exhaustion, coldness, restlessness, appreciation, admiration, and humility. Although now, mid-season, we seem weathered down- Hōlanikū is the source of our energy and motivation. ʻĀina kūpuna. Mana. A force pulling us in and driving us forward as we progress in protecting and preserving Papahānaumokuākea.