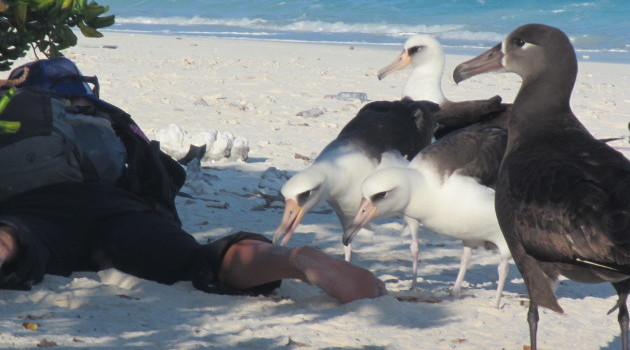 Greetings again, dear readers. We have completed the second week of being here on Hōlanikū. I couldn’t have asked for a better way to start this week off than by greeting the sun with my fellow team members. I’m thankful for their support in allowing me to share my knowledge (ʻike) of the Hawaiian culture. We all come from diverse backgrounds and yet we all play a role in sharing each of our own ʻike-whether it’s from a cultural or scientific perspective. Kōkua aku, kōkua mai.

Although we are a small group, this group is full of hammahs. For real, though. There’s only 5 of us and we have a goal of completing 35 acres each week. Not only do we hit our goal with those acres, we also complete other tasks throughout the day. We spend the mornings making our way through thick naupaka bushes-spraying the invasive plant species that I mentioned before, and some new ones as well. And then we go and do other things that include hauling, pulling, transporting, watering, counting, and so much more.

Monday-we scrubbed the algae off our 17′ vessel. Tuesday- since there was a monk seal near the pier and we couldn’t finish the boat, we propagated kāwelu.
Wednesday-we finished scrubbing the boat and brought it up on land. That was hard work!
Thursday, we elevated the huge marine debris bags on the pier so that it doesn’t get soaked and rips.
Friday, we caged naupaka that was out-planted so that the mōlī don’t destroy it when they come – which should be in a week or so. I’m so excited!
Last week, I did my first monk seal survey.
Today, October 15, I did my first shorebird survey while I was accompanied by Andy as he did the monk seal survey. I mostly saw ʻakekeke, the ruddy turnstone, for the birds we were surveying. There were many ʻiwa and boobies soaring gracefully in the air. The wind is starting to pick up and today was the perfect day to have a booby land on a stick that we were holding in our hands, too. However, the boobies were attracted to Andy more than they were to me. There was one that came really close to landing on the stick I was holding, but then it flew away. There’s just something special about Andy that had all the boobies fly straight to him. I think he’s a booby whisperer.

It was an experience though! One day, a bird will come to me. One day, 😊. Besides surveying the birds, we also picked up marine debris that could be a hazard for marine animals. Today, I noticed more shoes than usual. I came up with the idea of taking a picture while wearing the various shoes and slippers that I find and put together a huge collage. It’ll be cool to see all of the random-kine stuff that you could find here, but then it’ll also be a realization of where belongings end up. It really makes you think of what happens next when you discard things.

The wind is starting to pick up which is nice while we’re working in the field. It’s so hot, but the breeze just makes everything much better. Because the wind is picking up, I don’t have to use a tiny battery powered fan to fall asleep. The outside showers are now getting colder with the breeze and all. I’m going to bust out the solar showers soon. Although, since it’s been so hot, it’s been nice not sweating right after I shower. I’ve been wearing a pareu every day, except now I’m starting to wear clothes. Slowly, but surely, the layers of clothes will pile on.

I love starting the working day as the sun rises at 7:50am (6:50am here), watching the colors of the sky change from pink to orange and then the sky radiates blue with the wispy to puffy clouds. Since it’s such a small atoll, you can see everything from the sunrise to the sunset, the moonrise and moonset – just a clear view of EVERYTHING.

And how about the mahina this week? Hina girl is looking so uʻi! I’m stoked to be able to have a clear visual of the moon with no lights, no cities, and watch her during each phase. It’s a full moon tonight, beautiful Hoku, except, Māhealani (tomorrow) is considered the full moon. The mahina shines so brightly. He uʻi maoli nō! It’s so bright that I don’t even need to use the night light. Everything here is so beautiful.

Well, we made it to our second week of being here. On to the next 26 or so! Ua hōʻea kākou i ka pau ʻana o kaʻu puke hoʻomanaʻo no kēia pule. I think itʻs going to become the usual that I end each blog with an ʻōlelo noʻeau that pretty much sums each week. Hereʻs the ʻōlelo noʻeau for this week: “E lauhoe mai nā waʻa; i ke kā, i ka hoe; i ka hoe, i ke kā; pae aku i ka ʻāina” (everybody paddles the canoes together; bail and paddle, paddle and bail, and the shore is reached). In other words, pitch in with a will, everybody, and the work is quickly done. This ʻōlelo noʻeau doesn’t relate to the events for this week only, but also for extent of this whole trip. We are an awesome group (of hammahs) and we’re all pulling our weight and the result is getting tasks completed in a fast and effective way. One excellent value that is implemented during this trip is laulima meaning many hands working together. In Andy’s words, we’re straight “crushing it.” This is a hard-working team and we’re getting many things done!