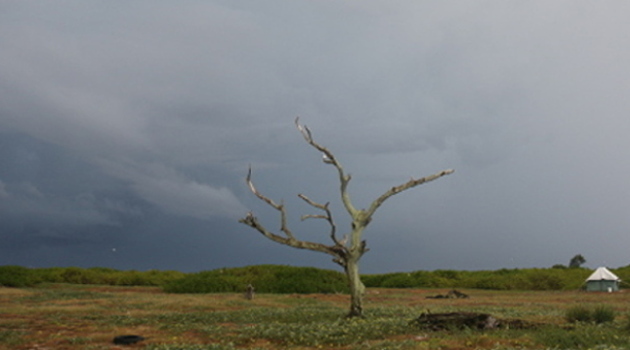 Howzit kākou! The first week of the new year is pau and soon it will be February! Along with the new year came new tasks for us to do. A lot of it had to do with the weather we had this week. We had a few showers in the beginning of the week then there was a heavy downpour towards the end, allowing us to treat only 13 acres. There was some excitement with thunder and lightning too. The rain ceased our spraying, so we turned to alternative tasks such as working in the nursery and emptying out the seeps and guzzlers-water sources for the Laysan ducks. Like I have mentioned before, we have been having a problem with mosquito larvae inside those seeps and guzzlers. After doing weekly seep checks and mosquito dunks, we finally emptied out all the water from a few of them around the island using 5-gallon buckets and pumps. Then we had the fun, dirty, and oh so sweet-smelling task of scooping up the muck on the bottom with shovels. The seeps and guzzlers were all cleaned, and only a mosquito dunk was left in the empty guzzlers, with the hopes that all mosquito larvae will perish. It was an interesting task to do in both rain and sunshine. With the heavy rainfall, the seeps and guzzlers were filling up again with fresh water. So, we will see how things go! The constant checking of water sources for mosquito larvae and preventing of water collection around the island continues.

As for the constant downpour of rain we received this week, by Friday many albatross’s nests around the island had flooded.  Thus, the new task of digging trenches near the flooded nests had commenced. We focused on nests in the East Turnaround, Runway, and South of camp, these are areas expected to flood due to the hard pact soil that makes it difficult to dig deep trenches. There were also difficulties with the elevation, extending the time we spent on each nest trying to make sure the trench leads somewhere, and the water does not just collect, allowing the water to flow back to the nests. All in all, most of the ones we dug were successful in draining the water from the flooded nests.

Of course, the whole scene is a shame because one would only wish that these wonderful creatures would live in nothing but peace and tranquility. However, the intimacy of working with an individual nest really strikes me-to be eye to eye with an albatross while bending over to hand scoop the water from its flooded nest as water continues to fill it up again. Its egg surrounded by water, feeling it, hoping that it will somewhat still be warm. Brah, I felt such a relief when there was bit of warmth from the egg despite the rainfall and the accompaniment of the chilly wind! That is when I had hope for that precious bird to survive.

The downpour continued from Friday evening and through Saturday. The rainfall was so loud on the roof of the bunk house. I had the trippy feeling of being awake ʻcause of the rain, worrying about the albatrosses, yet I still managed to dream at the same time. I got out of my bed around 7am and it was still dark outside. As I looked through my window facing Southeast of the island, I saw two headlamps out in the distance and I knew that Andy and Eryn were out there digging trenches again. After preparing myself for another cold and wet morning, I joined them.

It was then that I saw something heartbreaking on that early Saturday morning. As I went to drain out a mōlīʻs nest (Laysan Albatross), its body raised from the egg and I noticed that it had cracked. Ua komo nō ka minamina i loko oʻu! I felt so sorry for it. As I continued to dig in other areas, I saw that everything inside the egg spilled out into the nest. That mōlī just kept staring down at the egg below it while seemingly filled with great sadness. Brah, that just broke me inside. The whole time it was just staring down at its egg… braaaaaaaaah! Still hurts to even think about it. But that is just the way of life.

I am just happy that some of our efforts were successful. We will just have to continue to be ʻeleu (alert) and kūpaʻa (determined) in protecting these magnificent birds and their chicks that will arrive soon. Rain or shine, heat, or high winds, we will still do our part in protecting all those of Hōlanikū.

Although the rain can bring destruction, it can also be a source of renewal. The heavy rainfall replenished our water tanks and cisterns, collecting more than enough water for drinking, showering, washing dishes, laundry, and watering the nursery. Also, there is been lots of new growth of native plants, especially the kāwelu. So many babies are popping up! I can only imagine how much more new growth we will have due to the rain. Uē ka lani, ola ka honua!

Well gangeh, the first week of the new year has passed – a week full of excitement due to the weather and the new tasks that came with it. Despite facing difficulties with some of the tasks, we have-and we will-continue to persevere and remain kūpaʻa as we mālama all things of Hōlanikū. Like I said before, we are one hammah crew! 🙂

I think this ʻōlelo noʻeau will fit perfectly for this week. Eia ka ʻōlelo noʻeau o kēia pule: “ʻEloʻelo i ka wai o Kūlanihākoʻi” (Drenched by the water of Kūlanihākoʻi) This is said of a heavy downpour. Kūlanihākoʻi is the name of a mythical pond in the sky -Ka Puke ʻŌlelo Noʻeau a Pākuʻi #342. “Drenched” is the perfect word to describe the whole week.  With the on and off showers, we went back and forth between spraying and doing alternative work tasks and then, like the on and off showers, we would repeat our cycle. In addition to the constant change of work, so was the change of clothes as we sought warmth due to the rain. However, all our clothes that we changed into only became soaked in rain once again when we went back to work. Unable to hang our clothes outside on the line to dry, they only became moldy as we attempted to dry them inside our rooms. What a pleasant odor to fill our wooden bunk house! haha. It is just the sacrifice we make to fulfill our work that we have here. It is all for the love of Hōlanikū. Rain or shine, she go! (: