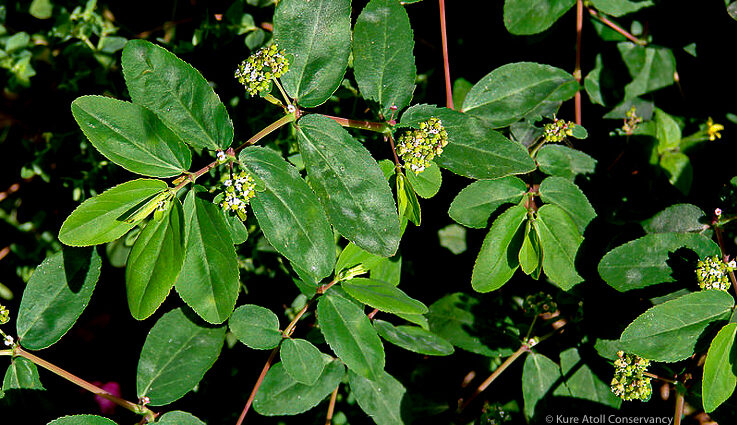 There are several Euphorbia species found on Kure, all non-native. E. maculata is distinctive due to the red center found on the leaves. Otherwise these species are fairly difficult to separate. Most are easily identifiable as Euphorbia based on leaf size, shape, and branching pattern, which is very similar in at least two other species.

Young E. maculata leaves lack the red central spot. There may be variation in leaf shape and color as the plant matures depending on growing conditions. They are readily identified as Euphorbia based on the pinkish to red stem.

Euphorbia cotyledons are generally ovate, usually dark green but often tinged with, or rimmed with purplish-red. The stems are also red or purple. The true leaves are lighter, usually pink to purple, but darken to green as they grow. Though the cotyledons bear a passing resemblance to Portulaca cotyledons, Portulaca are sessile (lacking a stem) and typically narrower.

By a fairly young age the red stem and crowded opposite leaves are distinctive. Euphorbia maculata often grows to a substantial size (and maturity) underneath other vegetation, making them fairly hard to treat.

Euphorbia peplus is a non-native plant restricted to the vicinity of Camp and Mea Mea RAs. It has reddish ascending stems and crowded elliptic leaves. E. peplus is seasonal, first appearing in the last months of the calendar year.

The veins in E. peplus leaves are very faint, but sometimes appear as a dark green pattern on a lighter yellow background. The flowers are tiny and lack petals, so they are very easy to overlook.

Four or more species of Euphorbia, all non-native, have been found on Kure including E. peplus, E. maculata, E. hypericifolia, and E. hirta. The latter two plants are generally somewhat difficult to identify to species. They are characterized by fleshy, ascending stems, and opposite leaves. Euphorbia maculata is relatively common in the vicinity of camp. Euphorbia peplus is also seen in camp, but in less frequency. E. hirta and E. hypericifolia have not been documented in recent years and may have been extirpated.