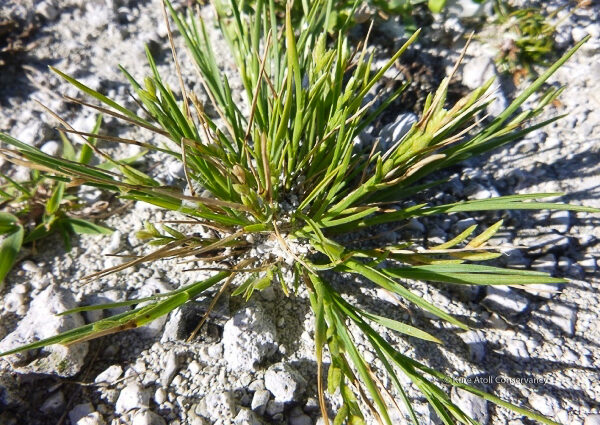 Eragrostis paupera, a native grass, is truly a dwarf. It can produce seed as little more than a sprout. Large plants are seldom more than a few inches tall or wide. It can be found abundantly on the runway but is rare elsewhere except due to out planting.

Young sprouts of E. paupera are characterized by opposite curled leaves, with early leaves often withering to a brown sheath from which later leaves grow. See the Poa annua section for comparative photos of those to plants as sprouts. At this stage, they are very similar to Fimbristylis.

At intermediate stages, E. paupera is structurally almost identical to Poa annua. Leaf shape, texture, color, and branching can all be very similar in both species. But, placed in context E. paupera is generally much smaller at this stage than Poa annua.

At even larger sizes the two plants no longer are difficult to discriminate. E. paupera grows from a central stem and radiates outward in a generally linear fashion, Poa annua grows in disorganized clusters, with heavily curved blades. While Poa annua can range in color from light to dark green, it rarely resembles the pale grayish-green color of E. paupera.