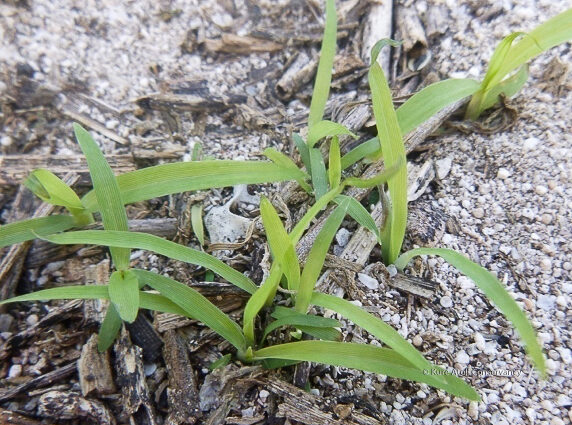 Eleusine is one of the most common non-native grasses on Kure. It has a long branched seed head and is characterized by long narrow blades, which have a distinct keel. The blades are soft and often prostrate, compared to the more rigid upright blades of Eragrostis variabilis. It can be distinguished from Cenchrus based on the reddish basal stem of the latter, and from Setaria based on blade width and color.

Eleusine cotyledons are usually very long and slender. It is somewhat more common to see Eleusine at this single-bladed stage than other grasses. The following blades are also relatively long and slender, though there can be a lot of variabilities, especially in young plants.

At a young age, Eleusine blades can be virtually identical in aspect ratio to Setaria blades. Both of the plants below have long narrow cotyledons, wider, more tapered following blades, and fine striations. The keel is somewhat more pronounced on the Eleusine (left) but it would be hard to definitively distinguish these plants to species at this size.

Eleusine has striations on the blades but they are very narrow, hence the blades are a generally darker green, and the central keel is more apparent than in Setaria. Also, note the fine white hairs that grow on the stem and dorsal surface of the blades of older Eleusine. These are lacking in Setaria.