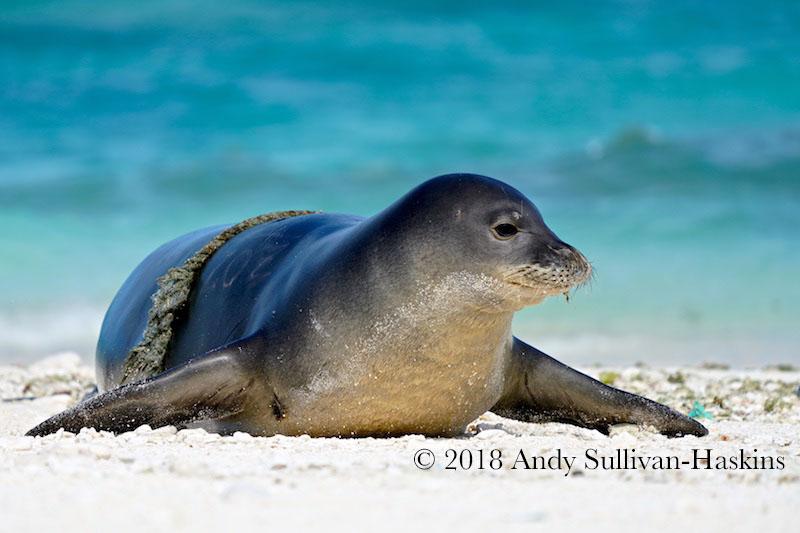 Spending a few years on this tiny island in the middle of the Pacific has taught me a lot. Each day offers new growth and a chance to engage with the natural world in a way we rarely get to in our modern lives. News of the day tends to be related to what’s happening on-island in regard to the wildlife, the weather or the native habitat and rarely do we pay much mind to the news from home whether it be political, in entertainment or otherwise. But regardless of our disconnection from society, it is often hard to ignore our connections to the modern world in terms of the waste that washes ashore every day on Kure’s beaches.

You can imagine Kure Atoll as an idyllic, surreal place; filled with dense wildlife, native vegetation, clouds that reflect an aqua glow from the lagoon, green flashes, stars that captivate, miles of white sand and the true sense of a conservation success story…all those things are absolutely accurate. Yet nastiness permeates many aspects of the island and one of the most prominent maladies is the constant inundation of marine plastic pollution that affects Kure in almost every way imaginable; a true juxtaposition of man relating to wild and a constant reminder of our species increasingly debilitating consumeristic lifestyle. Whether it be an albatross chick’s ribcage filled with plastic waste like lighters, bottle caps or plastic figurines; or a dead seabird carcass found tangled at the limbs by a popular children’s character balloon; or a critically endangered Laysan teal with a milk jug ring hooped around its neck; or even a simple plastic crate with coral growth artistically set in the center like a Damian Hurst piece designed to be displayed at the M.O.M.A. This nastiness is ever apparent.

The most recent bit of nastiness came in the form of a critically endangered Hawaiian monk seal that was disentangled from a loop of 1” thick rope that was bound tightly around the seal’s mid-section. Like all of Kure’s seal population, this seal has been assigned a permanent identification code and is tagged for monitoring. That’s how we could easily tell that this is the second time in the past few months that this seal has been disentangled. It’s a reminder of a fishing industry that continues to fill the oceans with derelict fishing gear both intentionally and unintentionally. If you read the last blog post by our winter team writer Soren George-Nichol you will recall that approximately 9,355lbs of marine pollution entanglement hazards (nets, lines, ropes and other discarded fishing gear that poses an entanglement threat to wildlife) were removed from Kure Atoll by the NOAA marine debris cruise just last month.

Each week on Kure Atoll we are fortunate enough to be allowed to conduct a survey of Kure’s critically endangered Hawaiian monk seal population that focuses on the surveying of young animals, pregnant females, and seals with injuries that could threaten their survival. During one of our most recent surveys, a DLNR/DOFAW staff member observed seal “KN02” entangled with a loop of rope bound tightly around its mid-section. Anytime any wildlife is observed with a possible entanglement we do our best to drop everything and garner further information on what is happening; Is it serious? Life-threatening? Is there actually an entanglement? Can it be removed without causing further harm to the animal?

All seal-related work we do is under our NOAA permit and we are required to first report the observed entanglement. So after receiving the situation report from one of our NOAA-permitted DOFAW personnel, we reached out to NOAA and was given permission from our primary NOAA contact to prepare for a dis-entanglement intervention and to scout the seals last known location. We were happy to find the seal playing in the water around the same area where it was first observed and relieved that it hauled-out onto the beach-in a broad, sandy area, free from rocks or other debris that could pose an injury risk to us or the seal. Everything must be considered when working to disentangle an animal. Hawaiian monk seals are wild animals and must be treated as such. They are big, with adults weighing anywhere from 180-270kg, so any interaction with a seal like this one could pose a serious risk of injury to anyone involved.

With guidance and instructions from NOAA, the three DLNR/DOFAW personnel involved gathered and formulated a game plan discussing the risks, methods and every person’s assigned role before proceeding to remove the entanglement with bolt cutters. The actual procedure lasted a mere 5-seconds and the line was easily cut. The seal woke and rose slightly to vocalize but laid back down after we quickly departed from the seal’s immediate vicinity and observed from a distance. The seal was soon fast asleep and free from the entanglement. 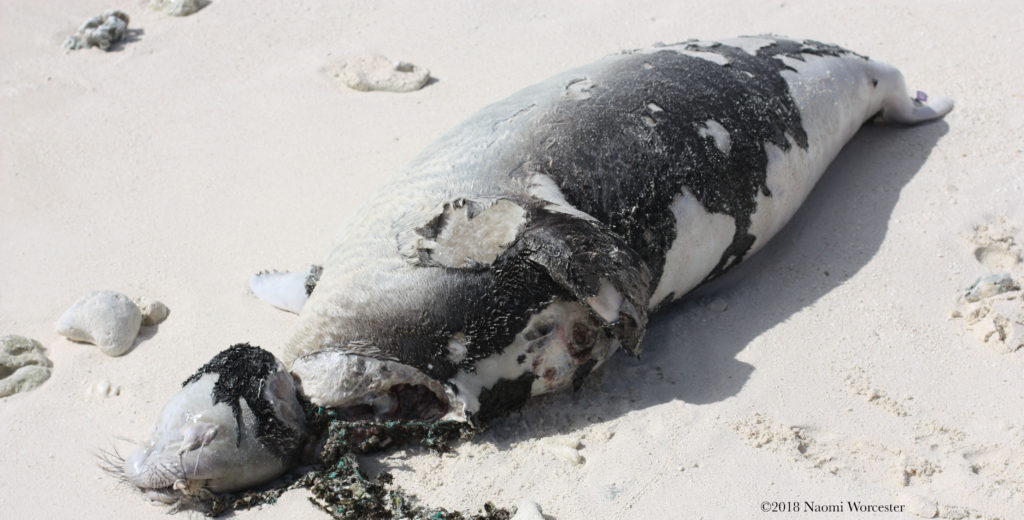 Earlier this year seal VK12 (a female seal under 1-year-old pictured above) was found by NOAA/NMFS personnel dead. The seal was found washed ashore with fishing net tangled around its neck. Coral that had been ripped out by the derelict fishing gear was also tangled in the net indicating the seal may have been trapped or tethered to the reef by the entanglement.

NOAA reports that 32% of all monk seals are here today due to recovery actions; either intervention seals or offspring of these seals.

“KN02” is a 5-year-old female seal who is just entering the reproductive population.