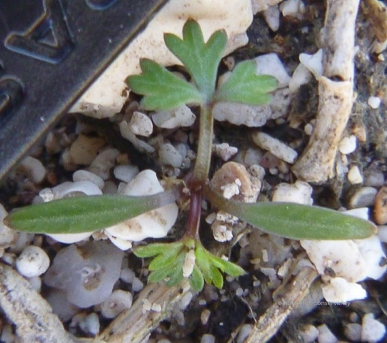 Ciclospermum is a non-native plant that generally resembles celery, with long stalks crowned by heavily branched opposite leaves. It is found mostly in camp and nearby RAs and in the west turnaround. It is somewhat seasonal, usually occurring between October and May.

Ciclospermum cotyledons are linear to lanceolate, widening to a maximum width about halfway between the base of the stem and the tip. A central nerve is visible on these leaves as a slightly raised line. Subsequent leaves are highly dissected, often lobed and branched roughly in patterns of 3, and also bear a faint raised nerve along the centerlines. The stalk is generally long, reddish, and has the classic shape that we associate with edible celery. The cotyledons are neither large nor persistent so you are unlikely to see them without some effort.

Ciclospermum sprouts often emerge from the substrate with the cotyledons below the surface, thus immediately showing the characteristic palmate lobed leaf pattern. Though it superficially resembles Coronopus, it can be readily distinguished based on color, branching pattern, and long stem.  The early non-branching leaves on Coronopus are also much more likely to be visible, and differ from Ciclospermum in being widest near the well rounded tip.