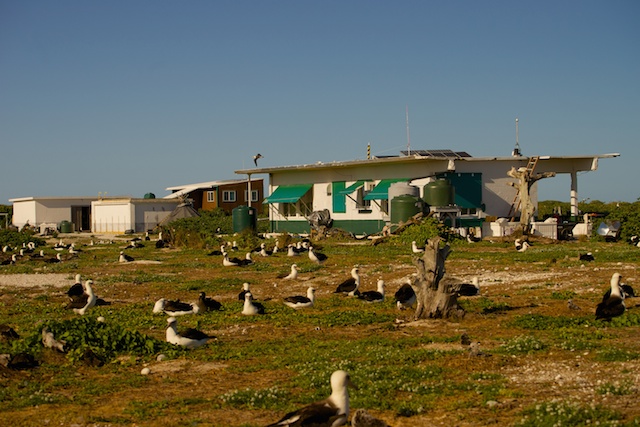 Imagine what life could be like here on Green Island at times feels like something scripted for a reality TV show. Let us take six individuals who all but two don’t know a single thing about the others. Fly them to a set location and then drop them off on a small remote island to live and work with each other for six straight months. Take away cell phones, limit them to text-only email, give them a supply of coffee that will at some point run out, and heck, throw in a couple thousand birds to add a Hitchcock-like effect to it. Surely there has to be cameras hidden around to find the juicy gossip or exact moment when someone snaps or can’t take it anymore.

Well, sadly, if our camp and crew were to be a reality TV show we’d probably be pretty boring to watch. Well, that might actually be a good thing for those of us here but I will say we might make a pretty good comedy skit from all the laughs we have shared. To put it frankly, life here on Kure has been rather comfortable. I’m sure many are curious what exactly our living arrangement is like here and especially after all the gourmet food I mentioned we eat regularly (it’s a reach but I’m secretly hoping more than just our mothers read this weekly). For a remote island field camp, Kure is what I would call cush.

Though an aerial of the island today would look drastically different than one taken from the bustling Coast Guard era, a few of the structures we use still stand from that point in time. Everything else that once was here now lies thus far removed or in remnants, like the cement pilings the 625-foot tall LORAN tower was once anchored to. What remains in full is our cistern for water catchment, our storage shed, and our main house building. I’ll be the first to attest how fortunate we are to have them as they not only provide ample shelter but a more solid feel than one could have expected here. When high winds blow or you want space to relax after a long day’s work, it by far beats coming home to a tent or confined trailer.

The centerpiece of life within the camp and a dynamic setting for all it holds within its walls is our main house building. From a large bedroom attached outside, a central kitchen and dining area, library and reference shelves, a small office nook, food storage room, and a supplies/spare room, we pack a lot inside for its seemingly small footprint. Of the many memorable moments our crew has had, it was likely within this space around the kitchen table after a meal or late night weekend hang out. With windows, a plenty it doesn’t take on the feeling of a deep dark dungeon and the cinder block walls help give you a break from the noise always going on outside. For the kitchen alone, we are blessed with far more than one would ever think necessary to have available at a field camp as remote as this. Our kitchen is well stocked with both supplies and cooking appliances. With a four-burner small range oven, additional side burners, and most anything you would need to cook with, it should be easy to see why we can make the meals we do. To prove my point more, you know you have enough when you have an apple corer on an island you can’t even have fresh apples on.

When I interviewed for this position I was informed that our other living arrangements were best related to a wooded beach bungalow. That might not be the exact description they used but it was something close and our bunkhouse is much in that idea minus the beach laying a little further away. Constructed in 2011, it’s a quaint setting to live in especially after a day in the field. With four individual rooms, actual (cot sized) mattresses, and a center space most often used by our group to watch movies in, you can see why living here isn’t so bad. Set aside the one squeaky floorboard I have and there isn’t much to complain about. Not that that’s a complaint I just feel bad when I get up at night and the sound surely greets my neighbor next door. Knowing some field camps require tent camping or weather-port living, we’re fortunate to have all we have here. With freezers for food and enough solar power to charge basic items like iPods and cameras, we’re lucky to not have to “rough” it as much as we would have to. Given how much else we give up or go without to be here, having little creature comforts like a desk to sit and write at helps with living in an isolated environment or at least it does to me.

By now it probably sounds like Kure is some luxurious location to be featured in a beautiful colorful ad in some travel magazine. Let me remind you, this is very much still a field camp and by no means always so glamorous. We have the things we lack and things that you learn to get used to. This isn’t a bad thing though because I find it is part of the glory in being here. To be able to live in such simple a setting and be reminded what is really needed to get by is absolutely refreshing. Of course not paying utility bills or for rent kind of adds to that joy. I give my thanks for all those who ever helped build each of the places we use and can’t imagine the history of all the tenants before me, but as much as this island might seem like ours, I know it truly belongs to all these birds.

Buildings, food, and resources aside, the real quality of life on Kure is in the people you have this experience with. Though just six of us, with constantly working and living alongside each other, it’s not exactly as isolated as you might think it is. There is space to escape when you need it most but life here is very much the ongoing interaction between you and your campmates. Our camp’s joy lies in our many moments shared around meals, the hilarious conversations we find ourselves having about things like various spores or the intriguing discussions on particular subjects. Without access to an outside world, the crew quickly becomes family in a way and we have ourselves for our own entertainment. It might be fun to watch from the other end but I don’t think we’re anything all too exciting.

This island though, it definitely is.