Between You and Me by Noel Dunn 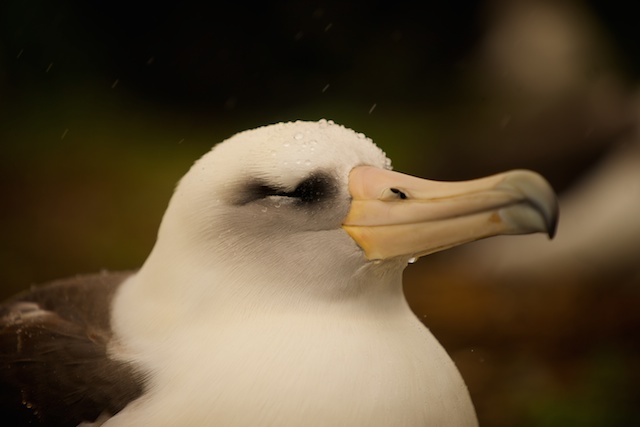 My favorite question from the Kapa’a High School students was from Vanessa who asked, ‘do the birds show any human characteristics?’ Her question is excellent, in part, because it shows the way humans have approached the topic of animal intelligence, personalities, and emotions for years. It is understandable why us, humans, want to use ourselves as the standard of excellence in each of these categories (I mean, what a compliment to us). However, I think trying to measure entire species against humans is keeping us blind to a world full of thinking and feeling animals. So do the birds act like humans? No. They act like birds 100% of the time. So after countless hours observing wild animals in their own habitat, do I think they have thoughts and feelings? Well, it’s a very taboo topic, but between you and me, yes I do.

I can’t imagine administering an IQ test to an albatross on Kure. I’m not sure how they would hold a pencil and that’s only the beginning of the obstacles we would have to overcome. However, without a doubt, I know these birds are intelligent. Each week, I watch adult albatross leave and return. Based on a satellite tracking experiment reported in Carl Safina’s book Eye of the Albatross, we know that some of the birds from French Frigate Shoals fly north to Alaska to feed. Satellite tracking conducted on Kure by DLNR, Oikonos, and Hawai’i Pacific University shows Black-footed albatross dispersing into the northwest Pacific, some flying all the way to Japan. They complete this journey without compasses, maps or radios. It may seem easy to simply fly into the vast ocean to find food but time and again these birds are able to find Kure, a tiny island in the middle of the Pacific. If I needed to accomplish the same journey to prove my intelligence to the albatross, I’m not sure I could do it, even with many high-tech tools, a giant ship and endless amounts of coffee.

I think the albatross have emotions because I watch complex social dynamics play out daily on Kure. I can’t speak albatross and I can’t read their minds any better than I can read my colleagues. But without talking to my coworkers on Kure, I can usually sense when they are happy or sad, if they are open to conversation or if they need space. It is this intuitive understanding, spoken without words, which I believe can be perceived in fellow animals. Emotions are a difficult topic to discuss in animals, in part because we struggle to define them in humans. Since the advent of language, songwriters and poets have tried to define love, amassing countless sonnets, songs, and tributes. The intangibility of feeling means aspiring and seasoned artists still grapple with elusive emotions. I see one definition of the word ‘love’ when I watch adult albatross coo to their hatching chicks. Some scientists might say there is simply a chemical connection between adult albatross and their chicks and that chemical is responsible for encouraging albatross parents to return from foraging trips to feed their chick. Scientifically, love in humans is also attributed to chemicals. Oxytocin bonds mothers to babies and numerous articles in Cosmopolitan Magazine have assured me that the all-purpose, feel-good endorphins expelled at the beginning of a relationship create the all-consuming feelings of lust which Cosmo says should not always be mistaken for love.

Individual albatross show different reactions to very similar scenarios. As I write my first draft of this blog, I am laying on a sarong at the beach near the pier in front of approximately 100 black-footed albatross. A handful of them has flown above me with one or two swooping low so they are less than a meter above my head. Another five have walked down the beach but when they notice me, they have opted to walk in a different direction. Meanwhile, one albatross has walked directly over to me and used his beak to pull on my sarong. What’s the difference? Is the albatross that is now pulling on my skirt more brave and curious than the rest? Has she encountered friendly humans in the past? When I walk home on the path, most of the albatross closely watch my movements and a few stand up as I pass (it makes me feel like a minor celebrity). One bird seems especially skittish and is walking very quickly in front of me, peering over his wing to see if I’m still behind him. I slow my pace down and the bird stops walking but is still bobbing his head up and down, maintaining momentum in case he needs to resume fleeing. What makes this bird more skittish than hundreds of others? Is his personality based on genetics or personal experience? What about ours?

I started to think that animals are intelligent and full of emotions in second grade when my family adopted a dog. I stopped talking about it when I was told in science class that there are no experiments or lab tests that conclusively prove that other species are intelligent or capable of emotions. Commentary on the topic has changed a bit in the past 20 years. Now a few animals including dolphins, killer whales, primates, and elephants are widely considered intelligent with complex social dynamics. Despite this ‘news’, they are still kept in cages around the world. Now that I have more scientific training, I understand the need to keep anthropomorphism out of scientific literature as it gives us objectivity in our search for new facts. However, after spending years observing wild animals in the wild in the name of science, I am also convinced that many more species of animals display a level of intelligence, emotions, and personalities. I am not saying that I can think of or know any tests to prove my theory. I actually think that locking animals up in order to figure out ‘who’ they are would only succeed in caging up their personalities and distorting our understanding of them. The topic of animal intelligence and feelings is often considered taboo because we lack words and concrete, testable definitions. A few scientists who have openly talked about the topic have been eschewed. However, by not talking about animal intelligence, feelings and personalities we risk an ignorance that would surely place our own intelligence level below many other animal species. I recently read and highly recommend Carl Safina’s latest book Beyond Words: what animals think and feel. He does a great job of exploring the topic of animal behavior that screams of intelligence, sounds a lot like love/heartache and reveals unique individuals.