A Moment on Midway 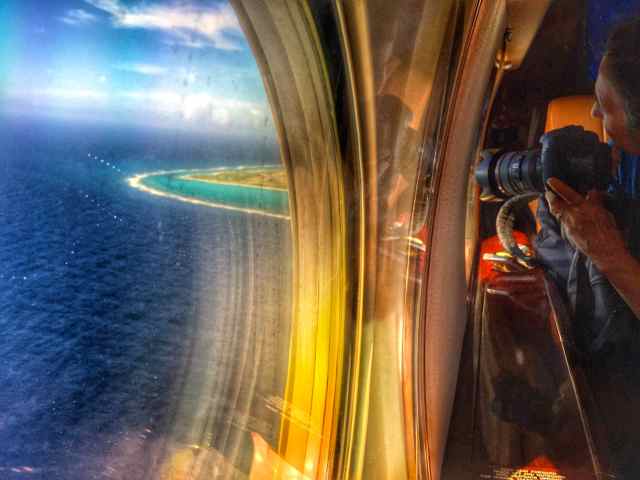 “In the midst of a huge ocean, the tiny dots of sand that form Midway Atoll may seem insignificant, but its islands house a unique blend of elements from the world’s natural and historic treasury, including unsurpassed wildlife resources and remnants from one of the most decisive battles of World War II. “

Boasting the largest colony of Laysan and Black-footed Albatross, including the oldest known Laysan Albatross (Wisdom, 64+ years old), and an immense historical background dating back to World War II, it’s hard not to be in awe when stepping onto Midway Island for the first time. Though there were no albatross at hand for our arrival, there were still plenty of sights to be seen. From the fluttering of White Terns throughout the crisp blue sky to the influx of thousands of Bonin Petrels as the evening sun set, it was not just an ornithologist’s dream but even a grand spectacle for any one admiring Mother Nature’s beauty. As one of our crewmembers aptly remarked when seeing the turquoise water for the first time, “Wow…that’s real? So I guess it’s not just painted like that, it actually looks as gorgeous as they depict it!” Mixed with this current image was the understanding that we stood on historical grounds. A place where many admired men and women called home and contributed to the efforts of our nation during times of war. It is with a true respect to stand there and imagine what it once looked like, about the roll it had played. It above all though, was an honor.

With Midway being the stopover point before boarding our vessel to Kure Atoll, our crew called the place home for a night. As not to just be casual visitors, we put ourselves to work in helping the island’s wildlife refuge biologists with their restoration efforts. This included pulling non-native ironwood trees, potting cuttings of native vegetation for propagation efforts, and the ever cute experience of feeding White Tern chicks collected from larger ironwood trees being removed in selected areas. Though I have never been to Midway before, you could see the impact and success their staff has already had in managing the resources there. It was a small reminder of the work we were still looking forward to do on Kure Atoll and the restoration of its habitat for these same seabird colonies.

We all would like to extend our thanks to the hospitality and generosity of the Midway staff. Not only is it a privilege to say we have now been, it was one last moment to have a few things we would no longer see once we arrived on Kure. This included pleasant bike rides between facilities, though weak and intermittent, our last chance at using the Internet (if you’re wondering how we are our sending these blogs, we have Inmarsat BGAN we can utilize to send large files like pictures so we aren’t entirely isolated), and a couple more bites of fresh fruit and veggies. With the quarantine procedures set on Kure to reduce further introductions of non-native species, fresh produce isn’t allowed so none of us will see the likes of a fresh apple, a nice head of lettuce, or a ripe avocado for the next six-months. But that’s the life of living in a field camp. You make sacrifices and we still have plenty of food to look forward to. That one last bowl of salad or heaping cone of ice cream though, that is to be cherished when you get that moment such as we did on Midway.

After numerous hours of preparation and work to get ready for this field season, Midway served as that final checkmark to the fact we would soon finally be on Kure. Here is to what lies ahead and the great journey we all are in store for. Thank you again Midway, it was a pleasure. See you again when we finish this adventure.