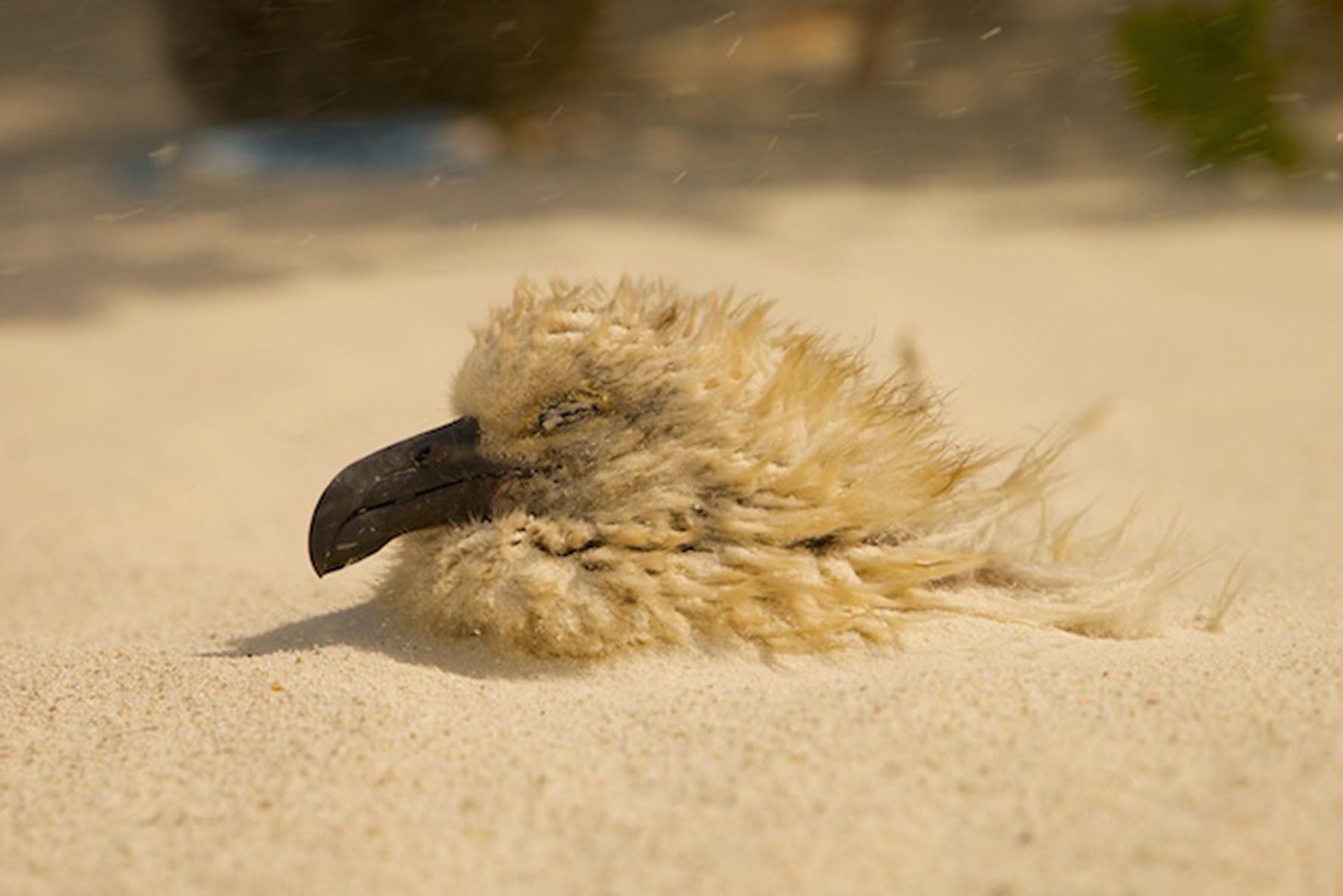 When the wind blows the buildings will creak, the trees will shake, and, sadly, some albatross chicks will find themselves a far ways from home.

Over the course of last week, Kure Atoll was bombarded with strong winds and high surf making for quite an interesting scene. With winds speeds consistently in the thirties for the greater portion of four days and gusts reaching as high as 54 mph, there was no abatement for birds or people alike. Nothing sums is up better than the metal Kure Atoll Wildlife Sanctuary sign hanging in the wind after the bolts on one pole snapped from the pressure.

Trying to minimize disturbance of albatross on nests especially with young chicks, we kept around camp and indoors working on the food and supply inventories to send to the summer crew as they prep for the upcoming changeover. It wasn’t exactly the most pleasant of times as some found it hard to sleep in the constant creaking and whistling of the wind surrounding the bunkhouse or ‘freezing’ as the temperature dropped down to 56 degrees and wind-chill a bit lower. I realize that may sound silly considering much of the U.S. is actually below freezing but it’s close to a record low on Green Island and after we acclimated from summer it feels worse than it is.

However tough it was for us, we fortunately could grit through the storm or hide inside whereas some albatross had to face the constant battering of wind and blasting sand head on. Initially worried the high swells and high tide for the week would potentially wash out nests along the shoreline, it was the wind that won taking the biggest toll on chicks. Nests in the interior fared better than those on the western shore where birds were pelted with sand leaving them half buried and with the clear look of misery as they did their best to hang tight for the egg or chick beneath them.

The worst of it was for birds that happened to nest in the channels between the beach naupaka. As one of our crew members witnessed firsthand, an adult merely standing up to quickly shake off the sand left its chick exposed to be blown out of the nest and sent tumbling up the path behind it. Because adults are so honed in during the breeding season, when something like this happens many adults aren’t aware their chick has disappeared and make no effort to go after it. Their focus is on where their nest bowl is regardless if something is in it or next to it. Thus for a chick too small who can’t make it back, without a helping hand it would be left to perish more often than not. When the winds finally calmed, there was a number of losses which is never a sight you want to see.

Amongst all the chaos, there were at least a few things to find light in. Last weekend the first Hawaiian Monk Seal pup of the year for the entire Hawaiian Archipelago was born and on the morning of January 31st we got to witness briefly the full lunar eclipse. Though clouds played hide and seek with the moon at the prime viewing time, it was still a strange feeling to walk out in darkness to a solid orb above with no glare or additional light filling the sky as is usually with a full moon. Unique enough too, three of us were able to see a moon-bow (night rainbow) the following morning as rain passed beyond the island. It’s arched like a rainbow but mostly gray.

So in fairer weather, all is well and we’re back to focusing on our restoration treatment as we finish out strong for the final weeks and month we have left before us.