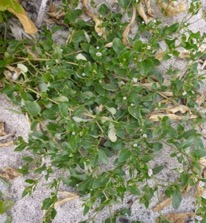 General Information
Boerhavia repens is a native plant called ʻalena.  It is a creeping vine easy to distinguish from other plants on Kure. One of the few instances ʻalena is mistaken for another plant is when it is confused with Flaveria trinervia.  The branching nerve pattern on Boerhavia readily distinguishes it from the 3-nerved pattern found on Flaveria. Another instance would be with its congener, B. coccinea, which was once a common sight throughout camp but as for 2018 this weed is seldom encountered.

Habitat Restoration
Unlike many other native plants on Kure, ʻalena is not grown in the nursery because it is widely distributed throughout the island. ʻAlena can, by nature, also dominate over other natives–an important factor to consider when recreating a diverse assemblage of natives.